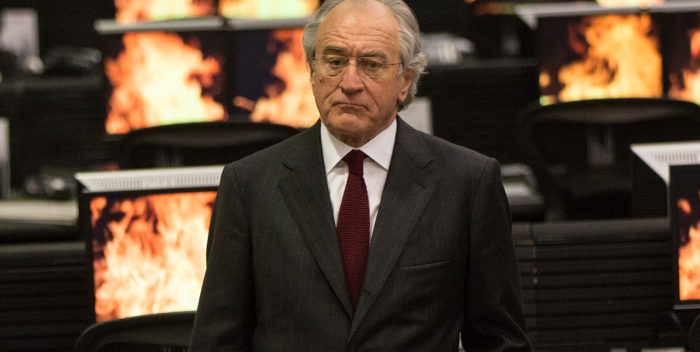 This was really Robert DeNiro week. First he was feted with a Lifetime Achievement Award at a heartfelt ceremony on Monday in New York. We looked back at his amazing career in awe.

Then last night HBO threw a lavish premiere at the Museum of Modern Art for Barry Levinson’s sensational “The Wizard of Lies” with DeNiro giving an award-winning performance as Bernie Madoff. What a night, a movie, an A list crowd. Michelle Pfeiffer plays Ruth Madoff, Alessandro Nivola is tragic son Mark, Nathan Darrow is son Andrew, with great supporting turns by Kathy Narducci, Hank Azaria, Lily Rabe and Kristen Connolly.

“Wizard” should clean up come September and the Emmy Awards. Levinson– working from a script by his son Sam with John Burnham Schwartz and Samuel Baum– has made a film that should have been in theaters first. It’s that good. Don’t worry– Bernie Madoff doesn’t come off as sympathetic. As he himself asks in the movie, “Am I a sociopath?” Yes, indeed, Bernie, you are. The fraudulent financier destroyed hundreds of lives. He blew up his own family, killing one son (Mark’s suicide) and not helping the other (Andrew died of lymphoma).

More on “Wizard” in my next item. Here’s another little scoop. I heard this first on Monday from Martin Scorsese, and now DeNiro himself confirms: their movie, “The Irishman” is going to back to its evocative original title, “I Heard You Paint Houses.” That’s the title of the book it’s based on. So much better! Said DeNiro: “I don’t know where The Irishman came from. It’s very bland.”

PS Levinson will be announcing a new HBO project shortly. He’s had a run of hits with them, including Al Pacino as Dr. Kevorkian and Phil Spector. The director of Best Picture “Rain Man” as well as “Diner,” “Tin Men,” “Bandits,” “Wag the Dog”– has found a great home with the cabler.