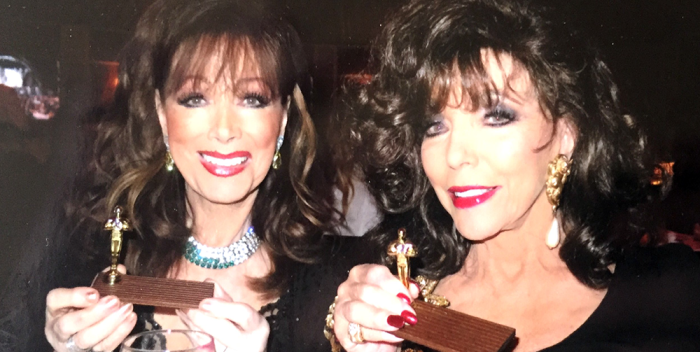 Jackie Collins, the sexy, scandalous, and adored storyteller of Hollywood’s glamour, drama and scintillating goings on, passed away a year a half ago to the shock of many who mourn her still. Her classy handprint on Hollywood pop culture is unparalleled; her 31 novels together sold more than 500 million copies in 40 countries worldwide.  Not only did she know where all the bodies were buried– she had a great attitude about keeping the secrets. They turned up reimagined in those novels. (“Hollywood Wives” maybe the greatest roman a clef tale of all time.)

To her family and friends, she was a beloved fixture at Clive Davis’s annual pre-Grammy party, at Spago on Horn in the old days and Craig’s on Melrose more recently– Jackie was simply worshiped by all.

Ironically, grande dame Jackie was down to earth, bawdy with just the best sense of humor.  She always had supportive words and advice for everyone including me, how grateful I am.  She also had zero arrogance and no illusions of grandeur.

Where diva Jackie was grand though was through her collections of art, objects and fine jewelry that she lovingly amassed along with her late husband, gallery and nightclub owner Oscar Lerman.  Some of her treasured possessions will be available to her devoted fans at an upcoming auction at Bonhams in Los Angeles;  May 16 and 17 is the live auction, on the 18th, the online sale of Objet d’arts and jewelry goes live.

Jackie’s daughter Rory Green summed her up best.  “Every piece of art our mother owned tells a story, and a visit to her home was like entering that story.  Our mother loved nothing more than to share her passion, which is why she had such a long and illustrious writing career. Each object in these collections has a glimmer of her essence-beautiful, loving, empowered, warm and truly one of a kind.”

A percentage of the proceeds from the sales of the 1,000-lot estate estimated to be worth $3 million will benefit three charities, TheMalala Fund, Equality Now and WriteGirl. For more info:  http://www.bonhams.com/auctions/24319/