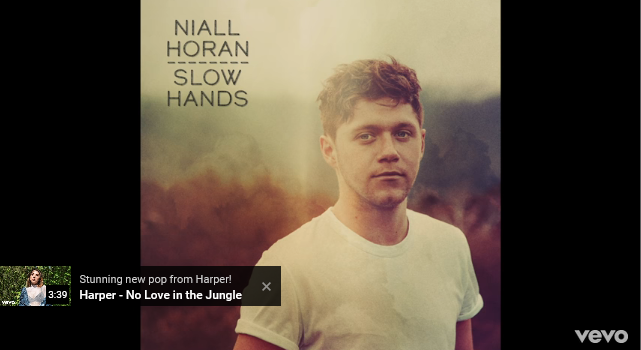 This morning the number 1 song on iTunes is by One Direction’s Niall Horan. “Slow Hands” is a catchy, bluesy shuffle. I mean, really catchy and well produced. Horan is the real singer songwriter from One Direction. When I attended my one One Direction show a couple of years ago, it was clear that Horan– strumming his guitar like a troubador– was the central musical talent in the group.

Niall’s success this morning is a counterpoint to Harry Styles’ troubles. Styles has lots of charisma and is one of the nicest chaps you could meet. The girls love him, too. But my sense is that he’s lost musically. His new “Sweet Creature,” dropped in the middle of the week, is just awful. And it’s his second flop in a row. “Sweet Creature” is number 17 on iTunes. Not doing a lot better is “Sign of the Times” at 15.

The latter single is barely getting fan attention. Today “Sign of the Times” drops to 27 from 19 on the Hits-Buzz Angle Song Revenue chart. No one liked it. “Sign” made $65,703 through yesterday for the last week. It’s over.

Someone asked me, “What did Harry Styles ever do to you?” I laughed. Nothing. He’s a nice guy! But he’s been saddled with bad songs, bad records. They’re not lighting a fire. My guess is Harry Styles debuts later this year in Chris Nolan’s “Dunkirk,” he’s really good, and takes off as an actor. Surprise! So far, his music doesn’t indicate big things.

Meanwhile, Horan’s single– and the one that preceded it, “This Town”– are really well written and well made, full of hooks, and hits out of the box. Now I’m curious to hear his album.