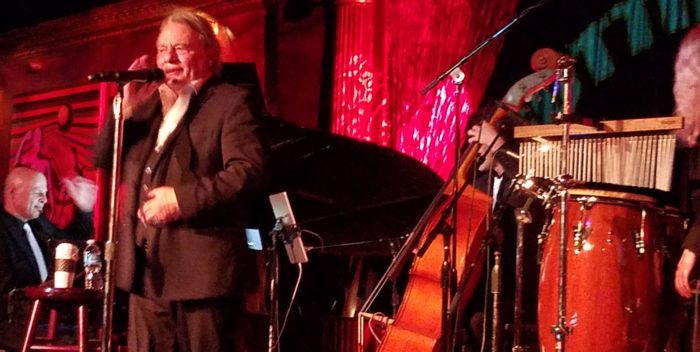 One of the great treats of living a while is seeing one of your heroes make a roaring comeback. Such is the case for the E Street Band’s Steve van Zandt and his wife Maureen who reunited the estranged Rascals a couple of years ago and put them on Broadway.

Now the van Zandts have been producing Monday nights at the Cutting Room with one of the vocally gifted Rascals, Eddie Brigati. For years and years Eddie was MIA while his former partner Felix Cavilliere was out and about. But the Broadway show reignited Eddie’s passion, and he’s picked up the microphone like he never left.

I didn’t know what to expect on Monday night, but pretty fast you’re seduced. At 70, Eddie is doing what he always wanted– Sinatra, Broadway songs, and some Rascals. He still has the voice, which has plenty of blue eyed soul that it takes corners you don’t expect. On the Rascals songs– “How Can I Be Sure,” “Groovin’,” and an inspired “Baby Let’s Wait” Brigati knows his way around blind folded and still finds the drama.

But it’s the Broadway numbers that really surprised me, especially “As If We Never Said Goodbye” from “Sunset Boulevard” and “Corner of the Sky” from “Pippin.” Eddie’s got the chops, and he’s got the heart. He’s also got a crack band, tight as a drum. Kudos to the van Zandts, who always know where the talent is.

Here’s a clip reel from last night. And yes, Eddie was introduced by Stevie’s “Sopranos” comrade, Vinnie Pastore. Don’t miss their last Monday next Monday at the Cutting Room.