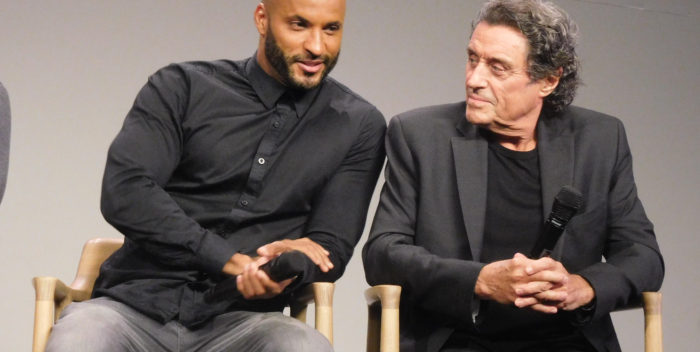 When it comes to sex, “American Gods” — the Starz Channel’s divine adaptation of Neil Gaiman’s fantasy novel  —    pushes the envelope. A lot of shows say that but this one really does.
And there are more erect (prosthetic) penises than I’ve ever seen on TV.
Starring Ian McShane as  the mysterious Mr. Wednesday and Ricky Whittle in a break-out performance as the just-out-of-prison Shadow Moon, “American Gods” is going to be a monster hit for the cable station.
Oscar and Emmy winner Cloris Leachman, who turns 91 next week, has her first love scene in decades.
But the sex scene that will be most controversial is between two Muslim men, one of whom is a god. (Both actors are straight, Fuller said.)
“I’m excited for people to see the Salim (Omid Abtahi)-Jinn (Mousa Krash) story,” said writer director Bryan Fuller at a recent interview. “And the beauty of that sex scene, which was not a small feat for two gay Muslim characters to have a beautiful, sophistical, sexual experience and what it was like for us to visually give you an idea of what it’s like to take a god inside you. I felt like it was a wonderful metaphor for a religious experience.”
Ian McShane added, “I love what the straight actor said to you, remember? He told you, ‘I understand. Just when you’re doing the special effects, give me a beautiful c–k, ok?’”
“And we did,” said Fuller.
Updated from the book’s 2001 publication  to 2017, the eight-episode series executive produced by Bryan Fuller (“Hannibal”) and Michael Green (“Logan”) – who also share co-show running credit – has at its core a love story but also delves into American conversations on race, immigration, civil liberties, corporate greed and faith.
McShane, best know for playing the foul-mouthed saloon owner in Deadwood, was asked about the tender scenes he has with Leachman.
Leachman plays a goddess of royal blood who has fallen on hard times.
In one scene McShane’s character kisses her on the mouth.
“She’s an old goddess he loved,” he said. “She was 90 when we shot. And when I kissed her, she said, ‘Is that it? What, no tongue?”
“Tell the story, Bryan,” said McShane, turning to Fuller.
“Cloris turned 90 on the set of American Gods, which was an incredible honor for all of us who have followed her and loved her for decades,” said Fuller, adding, “and we presented her with a cake that said, ‘I’m f**king 90!’ That’s what she wanted on the cake.”
“So she looked at the cake, said, ‘I’m f**king 90. F**k me, I’m 90!” repeated Fuller.
Leachman then said, “Seriously, line up the crew! Get them in here to f**k me. And start with the cute ones!”
“And so I did,” dead-panned Fuller.
Season 2 is not green lit yet but would be soon said the executive producers. The first eight episodes – I watched four – only cover about a third of the book. All three, Gaiman, Fuller and Green, have been adding characters and adding scenes to what’s in the book so the series presumably could run for many seasons.
Photo c2017 Showbiz411 by Paula Schwartz