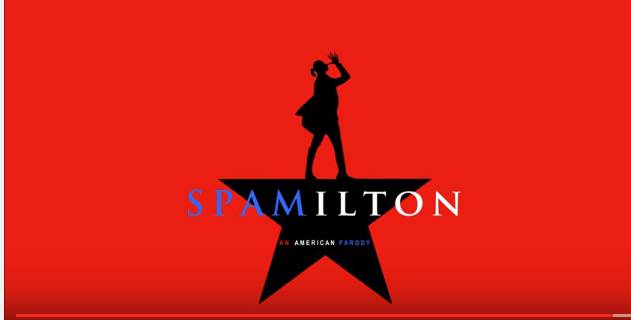 So you can’t get in to see “Hamilton”? How about the next best thing?

The hilarious parody called “Spamilton” is moving down to the theatre district from the Upper West Side. It’s still off-Broadway but it’s also on Broadway, at the 47th Street Theater, home of the Puerto Rican Traveling Theater.

“Spamilton” will also open this November at the Kirk Douglas Theater in downtown Los Angeles. At the Triad, on West 72nd St. “Spamilton” has been a non stop sellout. And really if you can’t get into “Hamilton,” this is a pretty sound alternative. (And a lot less expensive!)

The spoof makes merciless fun of “Hamilton,” Lin-Manuel Miranda and all of Broadway. That’s because “Forbidden Broadway” creator Gerard Alessandrini invented it. But all of his send ups over the years, this one is the funniest. And the cast is superb. There’s nothing better than seeing them rip through this sacred cow of a hit. My favorite part is Neil Patrick Harris singing “I Want to be in the Film When it Happens.”