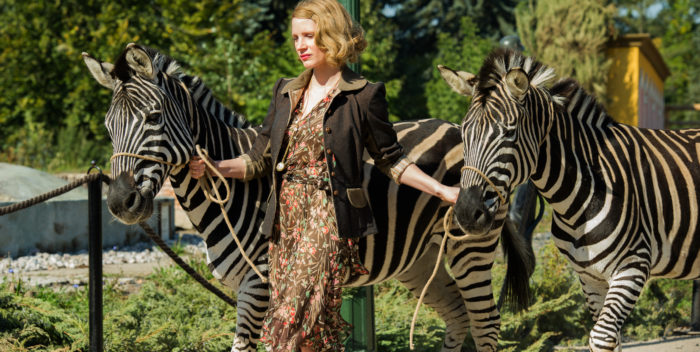 Even as Jessica Chastain’s “Zookeeper’s Wife” is unfolding as an indie hit comes word about a potential new project. I’m told that Chastain and Josh Brolin are circling a musical bio pic of George Jones and Tammy Wynette directed by Taylor Hackford. The word is the project is “coming together” fast. What a great film– and perfect director since Hackford knows music films best.

Meanwhile our Leah Sydney caught up with Chastain last week at the LA premiere of “Zookeeper,” where the busy actress (five films in the can) was hoping to get a rest soon. “Zookeeper” has already made $7.4 million in two weeks. Produced by Jamie Patricof, the film is a true story based on the best seller by Diane Ackerman. Chastain plays Polish heroine Antonina Zabinska, who along with her fellow animal loving husband Jan ( Belgian actor Johan Heldenbergh) are both keepers of the Warsaw Zoo.  They heroically managed to save hundreds of Jews by hiding them from the Nazis in empty animal cages, putting their own lives and that of their son at risk. Daniel Bruhl perfectly plays the sinister Nazi Zoologist Lutz Heck.

Written by Angela Workman and directed by Niki Caro, the film is at times truly moving and tough to watch, bittersweet and lovely– especially when showing the universal appeal of love for animals and the innate desire to help our fellow human beings in need.  At the recent premiere n Hollywood I asked Jessica what drew her to the role. “I wanted to celebrate a hero who used compassion to fight hate.”  She explained,  “A lot of times we only celebrate heroes who use violence.  It’s important to look at the non violent people.”

with reporting from RF