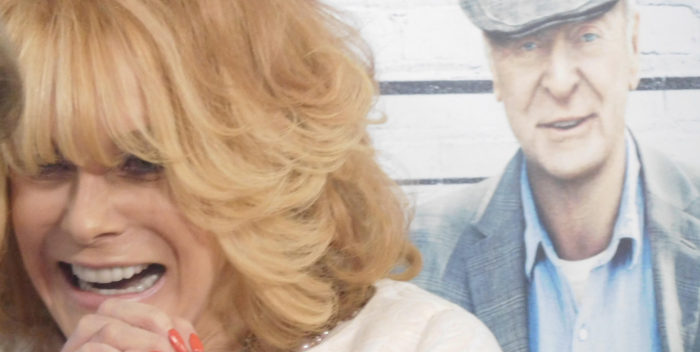 Sir Michael Caine doesn’t put on airs. At the world premiere of his new comedy, “Going in Style,” the two-time Oscar-winning actor was the first of the veteran stars of the film on the very red carpet at the SVA Theater in Chelsea where he chatted with all the journalists waiting for soundbytes.

Rounding out the cast of movie star legends are Alan Arkin and Morgan Freeman, along with Ann-Margret, who still looks as beautiful as she did in “Carnal Knowledge” some 47 years ago. (In “Going in Style” Ann-Margret plays a free-spirited, sexy woman who pursues Arkin’s character.)

The comedy is about a trio of retired steel workers and good friends who decide to rob a bank after they lose their pensions due to shady corporate restructuring. Underneath the comedy there are social issues and tensions that make the film particularly timely in 2017.

“We never set out for that, you know,” Caine told me when I noted the relevancy of the social issues raised in the film. “It just happened,” Caine told me on the red carpet.

The film is a reimagining of the 1979 film of the same title that starred Art Carney, Lee Strasberg and George Burns and was generally clobbered by the critics.

Said Caine, “The original movie was just some three old guys who robbed a bank, and we wanted a motivation for that. We gave them this motivation and it coincided with the situation now, so we’ve been very lucky.”

As for the undercurrent of anger that anchors the motivations, Caine, who comes from a cockney, English working class said, “I know exactly what that anger’s all about, yeah.”

Zack Braff who directed from a script by Theodore Melfi (“Hidden Figures”) told me Warner Bros. approached him to direct the film. “They wanted someone comfortable moving between comedy and drama to be the director and they asked me to do it.”

How intimidating was it to direct such a stellar cast?

“It was intimidating, but I have to say they are so friendly and cool they took the pressure off. They made it fun. And they’re ridiculous, always talking over each other. They’re real life buddies.”

In introductory remarks before the screening Braff said that when Warner Bros. approached him and said they had an amazing screenplay by Melfi and that stars Morgan Freeman and Michael Caine were already attached, his response when they asked him if he wanted to direct, was “Are you kidding?” He added, “All the reporters on the red carpet asked me what’s it been like? What’s it been like to direct these legends? I don’t know. It continues to be surreal. I think I might be friends with Morgan Freeman. It’s crazy.”