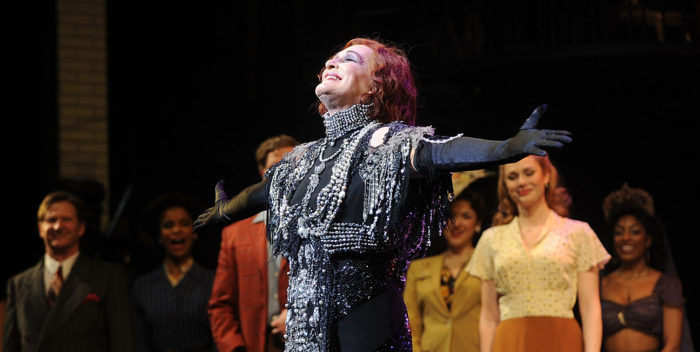 Last night on Broadway: Superstar Glenn Close sold her eyelashes, gloves, and signed photos for $2000 after a stunning night playing Nora Desmond in “Sunset Boulevard.” The money went to Broadway Cares/Equity Fights AIDS, and the auction– similar to those around town this month– was hilarious.

But more importantly: what a performance Ms. Close is giving night after night at the Palace Theater. Remember, she played Nora on Broadway for three years in the 1990s. Now in this new, pared down and much improved version, she’s found new depths and reserves. She is the consummate actress.

It’s funny, too, because Nora– who’s over the hill in Hollywood– is only 50. Glenn, who’s a little older than that now, is in the prime of her career. She’s mesmerizing. The Palace is a big, big theater and it’s filled in every seat. But the audience is with her all the way. When Nora finally arrives at Paramount Studios in Act 2, and a bright key light is turned on her, the audience starts cheering. When Glenn sings one Andrew Lloyd Webber’s top three songs, “As if We Never Said Goodbye,” a standing ovation erupts mid show. Every single night. It’s one of the few really thrilling moments on Broadway right now.

Every night the audience is full of Close admirers. Last night it was writer-director Paul Schrader and his actress wife Mary Beth Hurt– old, old friends. They were as dazzled as the rest of us. Kudos to Michael Xavier, Siobhan Dillon, and Fred Johanson who make for a mighty supporting cast.

Listen, Glenn Close has three Tony Awards including one for playing this role in the original production. But we’d better see her on this year’s Tony show. Maybe she’ll sing “As If” and bring down Radio City Music Hall. Maybe she can present Best Musical. But this is a moment on Broadway for us, and for her.