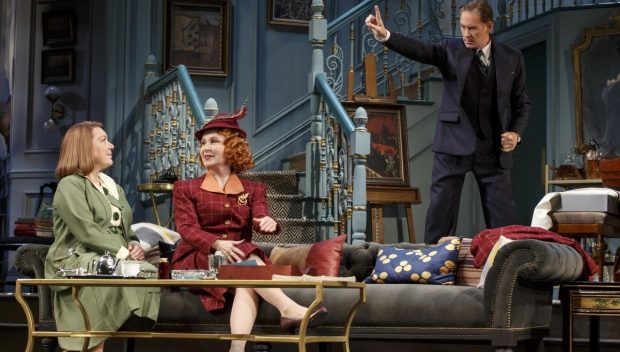 Is it possible Kevin Kline hasn’t been on Broadway in a decade? And that his Tony Awards were in 1978 and 1981?

Since then he’s appeared on stage a lot, but you know, he won an Oscar for “A Fish Called Wanda” and he’s made lots and lots of movies.

But he’s on track to win the Tony for tonight’s revival of “Present Laughter,” a terrific production that is just as enjoyable as it can be.

Kline heads a great cast that includes Kate Burton, Kristine Nielsen, Cobie Smulders, Reg Rogers, and Peter Francis James. They are all superb, especially Nielsen, who I can say without question I “stalk”– she is one of a kind. Smulders slinks, Rogers is manic as ever, Burton is wise and funny–they are a solid team directed by Moritz von Stuelpnagel.

But it’s all about Kevin Kline as Garry, the British stage star whom Coward fashioned this farce around in 1939. It just shows you about Coward. Like a lot of material in that time– 1938-39– the talk of sex is very modern. It’s clear everyone’s sleeping around. Affairs are more common than not. And Garry Essendine, who’s a big star, is obviously shagging one woman fan after another.

Garry’s got a smart-cracking wife (the great Kate Burton) from whom he’s estranged, but they’re still pals, and she knows he cats around. She’s got her own life. He’s got the Girl Friday, Monica (Nielsen) who also cleans up after his messes. But then there’s the wife of the best friend (Smulders) who’s already got a lover but wants Garry, and the 24 year old ingenue who throws herself at him (Tedra Millan, in an impressive Broadway debut).

Garry’s London townhouse is the setting — and a what a set by David Zinn! Everyone is rich, and they are all just hanging around idly getting into trouble. It sort of reminds you of the movie in
“The Purple Rose of Cairo.” The patter is so deft, that unless you noticed no TV or cell phones, it could easily be a swish London home in 2017.

Where Kline could just make Garry a buffoon is where you see him work his magic. Between his physical agility and linguistic dexterity– Kline is fast, and smart– Garry is hilariously self-aware of his own foibles. Whenever he answers the door he stops to check himself in the mirror, but not a lot– just enough–so we get it. And as Garry says, which Kline delivers sublimely, “I’m always acting!”

Kline’s return to Broadway brought out a nice crowd for opening night. Tina Fey and her husband, Jeff, sat on the aisle in front of Graydon Carter and his wife, Anna. Former Police Chief Bill Bratton came with his journalist wife Rikki Kleiman. I ran into the great Michael Stuhlbarg. Kline’s actress wife Phoebe Cates was there with their grown kids. Playwright Paula Vogel was in the house as well as Brian Dennehy and Cobie Smulders’ husband, former SNL player Taran Killam.

The producers threw a big party for Kline afterwards at the Gotham on 36th St. that included a pianist playing a white baby grand on a pedestal in the center of the round room. It was so classy. The lighting was very Cole Porter, too. Garry Essendine would have loved it. But I guess Kevin didn’t, Kline made a five minute appearance, then skipped out with his family. A big round table with a placard that read “Kline” sat empty all night. What can you do?

…MEANWHILE Off Broadway “Church and State,” an exceptional new play by Jason Odell Williams, is doing brisk business and getting raves. Every Wednesday at New World Stages (50th St. and Eighth Avenue) they have a talk back with the cast and special guests about gun violence. Last night the talk back was with the people who run the Virginia Tech Victims Family Outreach Foundation including my brother, Paul Friedman, the Executive Director, who is passionate about this cause, and founder Joe Samaha, who lost his daughter Reema in the Virginia Tech shooting. The play– which is funny and sad– provoked a lot of discussion about campus safety. For more info on the organization click here. This is important stuff.