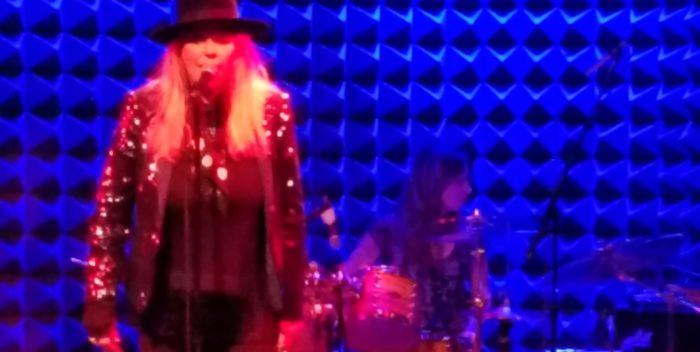 What becomes a muse best? Aging well, which is what Bebe Buell has done. Mother of movie star Liv Tyler, Buell was best known in the 70s and 80s as a Playboy playmate, Ford model, and girlfriend of rockers like Steven Tyler (father of Liv), Todd Rundgren, Elvis Costello, Rod Stewart, etc. She wrote all about it in a bestseller called “Rebel Heart,” that showed class and humor.

But Buell always wanted to be the rock star, not the muse. A surprisingly gifted songwriter who has a way with lyrics, she’s had a keen eye observing 40 years of rock royalty. Last night — and again tonight– she’s at Joe’s Pub performing her songs, reminiscing and leading a miraculous two piece band that consists of her husband Jim Walls (a whiz who can make two sound like four) and a Nashville drummer named Mindy Wright.

If you have any interest in the rock world of the last four decades, Buell’s show is for you. Last night Little Steven van Zandt and his wife Maureen showed up, as well as singer Jenny Muldaur, downtown publicist Kelly Cutrone, rock fixture Liz Derringer, and so on. Like yours truly, they adored the sheer chutzpah of a 60 plus rock “glam-ma” who’s seen it all and reports it back to wittily in song.

Think of Bebe as the American Marianne Faithfull (actually one of idols), who navigated dangerous passages and came out a winner. Like Marianne, Bebe has a husky voice that has surprising sweetness and handles intricate turns in rock belting. That’s not so easy. Plus, she’s not singing covers– these are her songs, refined over the last few years. Two of them are country songs– a result of moving to Nashville. One of them, written with Crystal Gayle, called “By a Woman,” is yearning to be a hit on country radio.

A lot of the songs are autobiographical. To former lover Rundgren “Can You Forgive?” spells out their problems and asks for resolution. “Too Sweet for this Town” is really about a Virginia Beach girl who landed at age 18 at Max’s Kansas City and was immediately critiqued by Andy Warhol and Lou Reed. “Jacuzzi Jungle” recalls her brief stint in Los Angeles. “Black Angel” is an ode to Joey Ramone, Buell’s late friend who encouraged her to keep writing and singing.

And don’t worry– there’s plenty of gossip about her early efforts to get the boyfriends to take her seriously. When she was a teenager she was hanging out with the Cowsills, but progressed quickly to the Rolling Stones.

I hope this is the beginning of an occasional residency at Joe’s Pub. Bebe is so honest and endearing, she’s like a blast of fresh air. She also recalls a time when rock and celebrity were new and exciting in New York, a nostalgia that’s quite appealing. I hope Little Steven takes some of her songs and makes a “Broken English” album for her. It would be a lasting document.