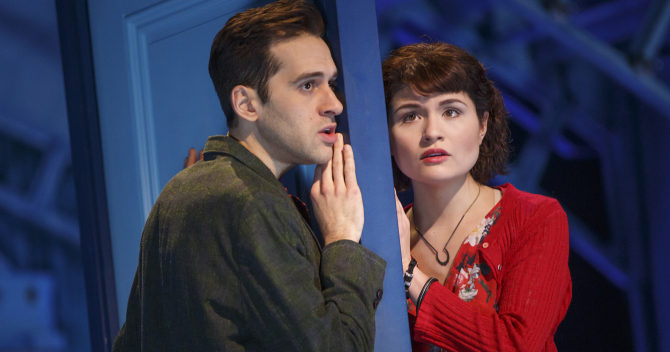 All the main theater critics are on the fence, as they say, about last night’s Broadway musical opening, “Amelie.” This is the adaptation of the 2001 Audrey Tatou-starring French movie, a fanciful and charming romp that holds up even now and established Tatou as a star.

So this is what I can tell you: “Hamilton” Tony winner Phillipa Soo — the original Eliza Schuyler– could not be more charming herself, or more alluring as Amelie, the daydreamer. As Rosie O’Donnell said to me after the show, “this is her If/Then”– a reference to Idina Menzel’s star turn a couple of seasons ago as the lead in her musical.

Indeed, I’d be surprised if Soo didn’t get her own cult following out of “Amelie.” She certainly deserves a Tony nomination. She is as engaging and endearing as possible without being cloying. She also has the greatest voice, one which I could listen to all night.

So what’s the problem? “Amelie,” like so many new musicals, has no songs. It has music, lots of very well composed music. But there are no show stoppers. And no songs that define the characters. This leaves a cast of really fine actors in a bind. They can’t connect to the audience because they don’t have their own hooks. That’s it really, so simple.

Plus, “Amelie” can be confusing. Sometime you wonder where you are, or what’s happening. That’s not great for a one hour-45 minute show with no intermission. What does Amelie want? We’re not sure, she’s not sure. And that’s a big problem. Does she want love? Or does she just want to be quirky?

But then Soo is on stage almost all the time. When she’s not, you miss her. This won’t be her signature show, but it establishes her as a Broadway star, a Laura Benanti or Donna Murphy. And that’s a lot.

Plenty of interesting people came to see her last night, apart from Rosie including actress Amy Ryan, the famed Barbara Barrie (currently on Broadway in “Significant Others”)– her son, Aaron Harnick, produced the play. (Yes, his father was Jay Harnick and his uncle is Sheldon Harnick, who wrote “Fiddler.) Barrie brought along one of her “Significant” players, Sas Goldberg.

Again, “Amelie” is quite charming. Adam Chandler-Berat makes for a beguiling Nino, the object of Amelie’s dreams, and I really liked Harriet D. Foy as Suzanne, proprietress of Amelie’s French bistro. I wish they’d let her sing more. The rest of the cast is composed of real up and comers making their Broadway debuts. But it’s all about our Eliza, er, Amelie. You’ll want to be in the room where her career really happens on its own.