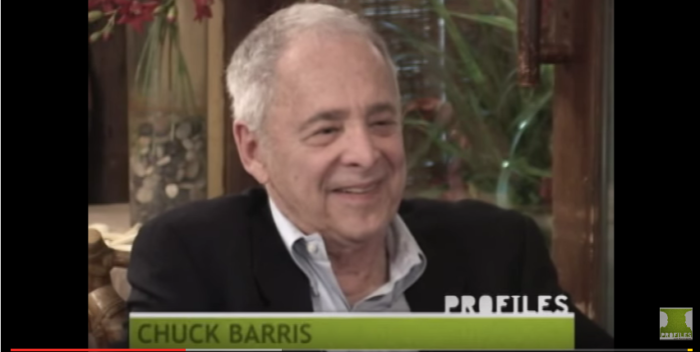 Yes, Chuck Barris is dead. The loony host of “The Gong Show” was 87. He finally got his own gong. Goodbye, Chuck.

Back in 2002, the Miramax movie had an opening night party right before New Year’s Eve. There were lots of famous people at the W Hotel including Joel and Ethan Coen, as well as director James Toback, co-star Drew Barrymore, Campbell Scott, Patricia Clarkson, Maria Bello, Liev Schreiber, Liv Tyler, (celebrating the debut of Lord of the Rings: The Two Towers the previous night), and his producing partner Steven Soderbergh.

They were there for Rockwell. Barris was kind of an odd bird. When I asked him about being a CIA hitman, he said: “I don’t talk about it, and if you’re interviewing me, I’m going to walk away.”

The only star who turned out for him was the (now late) Sheila McRae, a great Broadway star and Jackie Gleason’s Alice in the 60s version of “The Honeymooners.” Sheila, it turned out.  was actually a judge once on The Gong Show. Barris couldn’t believe it when they were reunited. “He was always a little crazy,” MacRae said.

Clooney told me a lovely story that night. His famous aunt, Rosemary Clooney, had died six months earlier. He said, “Christmas was a big time for her. Every year she’d send us a Christmas song on tape that she’d sing for the whole family. Then two years ago we got the tape and put it in and she said on it, I’ve been doing this for like 30 years and ‘I’ve run out of Christmas songs.’ So she sang ‘Easter Parade!’ Isn’t that great?” He took a moment. “But it’s still sad.” (Even sadder now is that Rosie’s son, Miguel Ferrer, has recently died at age 60.)

And now, Chuck Barris is dead. He’s the answer to a Trivial Pursuit question. Last week, I said to a friend, “I’m so sad, Chuck Berry died.” She replied, having mis-heard me: “Chuck Barris died?” And now he has.