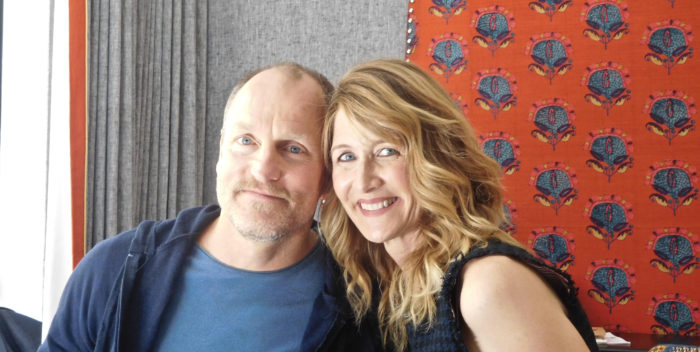 Woody Harrelson and Laura Dern stopped by the new Whitby Hotel in midtown Manhattan Sunday afternoon to promote their new film “Wilson,” based on the graphic novel by Daniel Clowes (“Ghost Story”) and directed by Craig Johnson (“The Skelton Twins”).

The actors, whose careers are flying, have blockbusters coming out this year (“War for the Planet of the Apes” and “Star Wars: The Last Jedi”). They held hands in easy going camaraderie nearly the entire time they spoke to reporters.

In “Wilson” Harrelson stars as a neurotic, nutty, obnoxious oddball who is ultimately endearing and charming because he’s played by Harrelson, who uses all his comic gifts to win you over.
Laura Dern plays Pippi, his ex-wife, a former drug addict with anger issues who is finally get her life together. After his dad dies Wilson tries to reconnect with Pippi, with whom he’s still in love. When she tells him she didn’t abort but gave up for adoption the child they conceived 17 years earlier, he makes it his mission to look up their daughter and forge an instant family. His daughter, Claire (Isabella Amara), is now a moody teenager with few friends and a bad attitude.She’s curious and willing to reconnect with her birth parents since her wealthy adoptive parents are generally inattentive and rarely home.

Wilson’s the kind of guy who can’t help oversharing. In an empty train car, he’s the one who will sit next to you and reveal every detail of his life or thought in his head when all want to do is snooze.

What was it like to play a man with no filter?

“I actually have less filter than I should,” Harrelson laughed. “I don’t think he’s a mean guy, I just think he’s a very honest guy, but he doesn’t know the repercussions of what he’s saying a lot of times and it comes out as kind of harsh. But I did notice that I was doing that quite a bit when we were shooting and even a little while after where I couldn’t shake it. I’d say, ‘Shit, why did I say that?’ You could just feel the uncomfortableness of it.”

According to the film’s production notes, Harrelson’s character has 4,000 books and endless stacks of magazines. Apparently this is symbolic of the fact that Wilson carries a lot of baggage with him and doesn’t want to let go.

Did Harrelson personally collect anything he couldn’t let go off and how hard was it to shake a role a journalist asked?

“In term of stuff I collect,” said Harrelson. “I live in Maui but I have a place in LA. And my buddy Owen (Wilson) tells me that I should be on an episode of ‘Celebrity Hoarders.’ Boxes just everywhere And it really isn’t that I’m hoarding,” he said. “But when I go on location, eventually everything that was on location ends up back there in a box. I don’t ever look at the box… I don’t want to look in that box. Yeah, I think maybe I’m collecting too much stuff and eventually my day will come when I can’t even walk in the house… I just gotta go through those damn boxes,” he laughed.

The movie’s high point is that it showcases Harrelson’s terrific comic timing and slapstick worthy of Buster Keaton. There’s a scene in a kiddie amusement park where he takes Claire and gets entangled in a bunch of balloons that is genius.

Harrelson told me it was an improv moment he came up with.

“Someone had balloons and I’m like, ‘Hey, could you slow down when you come by as I’m coming through, so that I could get tangled up?’ Just that kind of stuff, yeah I love that.”

Also at the amusement park, Wilson and Pippi whale on teenagers who are bullying Claire.

“We had so much fun in the mall too beating on those teenagers,” Laura Dern said. “We shot that for a while.”

“I shouted stuff at them like, ‘ Why are you so young!’” Harrelson laughed. “I don’t want to grow up!”

The actor said the movie gave him a chance to get back to his comic roots. “I just got a little distracted by the drama and the other things.”

When the film was first screened at Sundance Harrelson said he enjoyed hearing audiences laugh.

“You don’t always get that. Like at a lot of (my) movies I’ve never seen with an audience. God it’s a good feeling when you get that laughter.”

The final question to Dern and Harrelson was how they felt the movie reflected what was happening in the country today, especially politically?

“If I were more articulate I would answer that question but Laura is,” Harrelson said, deferring to his co-star.

“I, as a good wife, will answer that question for the both of us if I may,” cracked Dern.

“I think we both agree that this is an incredible time to be playing those characters… It’s really interesting to consider people’s discomfort with the truth and people’s discomfort with a character who would get in their face and want to connect and yet there is comfort with con men. And that’s really troubling, that we’re culturally more comfortable with a lie that somehow we can hang our hope on than the reality of where we are and what we need to do as a community to affect change… I think the more Wilsons we get the better off we may be.”

Asked if he agreed, “The more Wilsons the better,” Harrelson said, “I think in politics it’d be nice because you do get lied to quite a lot, and it does seem to be a certain degree of comfort with this lie… We built this country on the backs and the blood and the bombs of so many dispossessed people, you know? And we’re comfortable with the lie of this beautiful nation. Well, what about, let’s look at what the underbelly is? Let’s see how it really formed, you know? So, yeah, to me, I do think that’s true… I do think that we get comfortable with con man and let’s face it, politicians are just businessmen working for bigger businessmen, you know? And if you don’t have a lot of money, you’re not being represented. So the fact that there’s all these people who think, you know, our president is like representing the common man? I mean, c’mon!”