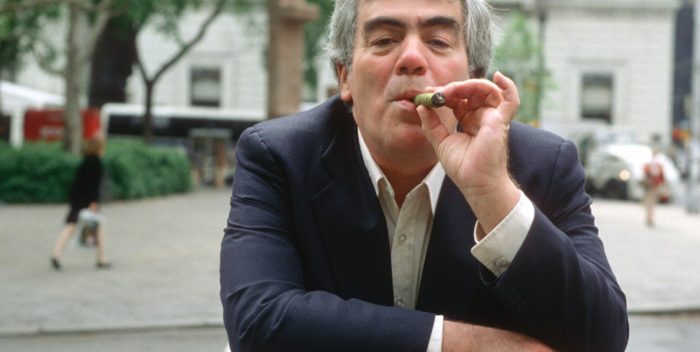 It’s almost fitting that no one can get Jimmy Breslin’s age right today. A reporter who lived on precision and fact, Breslin is pegged by the New York Times as 88, Wikipedia as 86, the Daily News (his longtime employer) at 87.

Jimmy Breslin was ageless. We flew on the same plane to the Democratic convention in Denver in 2008. Let’s say he was almost 78 years old. We arrived at the Denver Sheraton around 9pm and they’d sent all the porters home. It was two nights before the convention was going to begin, so they didn’t think they’d need any. (Denver– another story altogether.) I helped Jimmy carry in his and his wife’s bags. He was as raring to go as any young reporter. After all, I don’t think he’d missed a convention in 50 years. This one was probably his last.

I knew Jimmy a little from Elaine’s, and from various events I covered. He was larger than life, from all his reporting, and from Son of Sam in 1977. And from fighting with Norman Mailer but running with him for mayor against John Lindsay in 1969. Pretty much from the 60s into the 90s and almost up to 2008, Jimmy Breslin was the voice of New York. No one ever eclipsed him.

One of Robert DeNiro’s first movie roles was in “The Gang That Couldn’t Shoot Straight” adapted from Breslin’s 1969 novel about mobsters who couldn’t get anything right. The book was a hit, the movie was so-so, but the title outlasted everything. That title is used as headline or comment constantly for the last 40 years whenever any group of anything screws up. So Jimmy leaves that as a legacy as well as his Pulitzer, his other accolades, and all the regular people he wrote about. He illuminated our lives. I was happy– eager– and honored– to carry his bags that night.