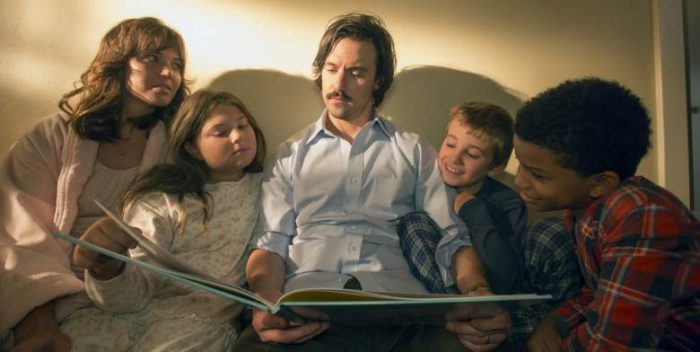 In true Hollywood style, NBC’s mega hit “This Is Us” screened their season finale, “Moonshadow,” at the Directors Guild tonight with a packed industry house and a Q and A after. The panel, moderated by “Access Hollywood’s” Natalie Morales and Kit Hoover, had all the cast (with the exception of Sterling K. Brown who was on location) and creator Dan Fogelman, who is shooting a movie in Europe.

The poignant tear jerker of an episode told the story of how the troubled but loving couple Jack (Milo Ventimiglia) and Rebecca (Mandy Moore) met. Fans were on edge thinking that the inevitable Jack death was going to happen tonight and were pleasantly surprised that he still lives. Kit noted, “we all thought Jack was going to die,” to which Milo admitted, “We’ve all been teasing that in the press, sorry. You’re all going to have wait a little longer. I get that question all the time. I tell people not to focus on how he died but how he lived.”

Mandy was then asked what was the hardest thing for her to film? “The fights” she answered to which Milo quipped, “I knew we were going down a deep dark path. We did it to crush America.” Chrissy Metz who plays Kate, was then was asked about her newfound notoriety. “I was in Bed, Bath and Beyond today, I needed something for my bathroom and no I didn’t have a coupon. A gentleman came up to me and asked if I could snapchat a video with him and his dogs. I was grateful to do it, even there.” Chrissy’s recent sexy Harper Bazaar layout was discussed. She explained, “Size does not equate beauty. We’re redefining what beauty is.”

Speaking about beauty, Mandy Moore revealed that her prosthetics take her 4 hours a day to put on, “I’m a morning person anyway,” Mandy noted. The producers admitted they didn’t know that Mandy Moore had sung a cover of Cat Steven’s “Moonshadow,” years ago (2003) until they Googled it. So that all was serendipity, her singing it tonight onstage the first time Jack sees his future beloved.

The cast then talked about how much they genuinely liked each other. Mandy noted, “I thought I was a nice person until I met Milo, because he literally knows everyone’s names on the show, I mean all the crew and cast, and he knows all about them.” She went on to extol Sterling. “We were shooting an outside scene, and Sterling gently took my hand and told me a bird had just ‘released,’ gently saying defecated on my hat. I mean who does that?”

What can we expect from season two? Co-showrunner Elizabeth Berger said, “Not as sad, lighter less intense.” Natalie wrapped up the night by saying, “it’s nice that NBC has a big hit again,” when the crowd laughed, she snickered back and said, “come on, I didn’t mean it that way.”