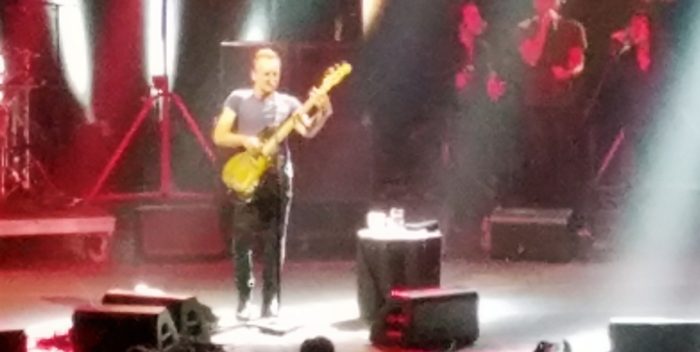 A foot of snow was not enough to deter a couple thousand people from filling the Hammerstein Ballroom last night for Sting. It was the Englishman in New York’s final US show of his “57th and 9th” tour and he told the crowd they could stop and visit that corner on the way home. “All you’ll see is snow,” he said, then added, “I’ll be walking home. I love walking in the snow.”

He loves Walking on the Moon, too, and so he sang that and a number of his solo and Police hits, as well several terrific songs from his latest album also called “57th and 9th.” The show has changed a bit since I saw it on February 8th in Los Angeles. Included were a marvelous rearrangement of “Fields of Gold,” and his country song “I Hung My Head,” which stacks up against the best of anything from Nashville.

The sound was particularly good in the Hammerstein Ballroom last night, and I found myself listening to the stories that occupy Sting’s songs– these narratives that are like short stories or novellas. As much “Roxanne” and “Message in a Bottle” were new wave or post-punk for their time, those songs have held up over the years because little sagas unfurled economically within them. Right away you feel for Roxanne, her red dress, and the nigh that stretches out before her. What is the message in that bottle? It’s love. 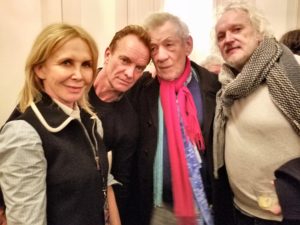 I’ve never heard Sting say this before, but last night when the audience finished singing “Message in a Bottle” and ‘sending out an SOS’ for the millionth time, he said, “I wrote that song almost 40 years ago in a little flat in London, with no one there but a cat who wasn’t interested in what I was doing. And to think 40 years later I’m here, with you, and you seem to know all the words—it means a lot to me.” He was genuinely moved, maybe because it was the end of tour leg, but really because it’s sort of amazing for an artist on stage to hear their material sung back to them with so much heart.

Anyway. The evening finished with Sting’s Oscar nominated song “The Empty Chair.” At the little after-reception in the Hammerstein, Mrs. Sting– Trudie Styler — chatted about movies she’s producing and glowed about her and Sting’s latest grandchild. Sting told Sir Ian McKellen — that’s right– Gandalf himself– who came with his life partner, the great director Sean Mathias– “I’ve lost four Oscars. I don’t know where I put them,” he joked. “You should have done a song for Lord of the Rings,” Sir Ian quipped back.

Sting’s show moves to Europe next. I hope they’re ready.