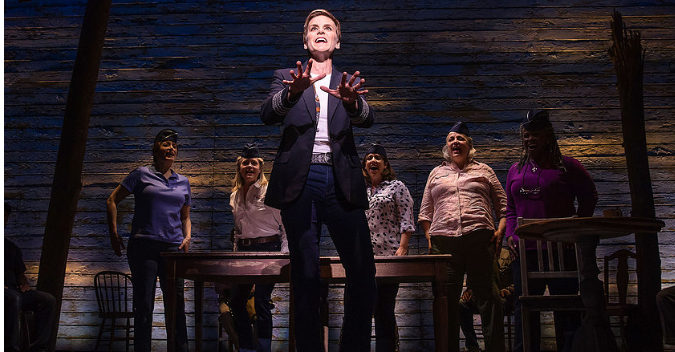 “Come from Away” has no stars and no big songs that stop the show. Still, it’s the sleeper hit of a very Broadway season in which musicals that stayed away last year while “Hamilton” ate up all the attention are coming in one after another.

This is the story of what happened when more than 7,000 airline passengers descended on Ganderm a small town in Newfoundland, Canada on September 11. 2001– when US airspace shut down and the planes had just one place to land. Maybe I’m particularly sensitive to this because my own parents wound up spending several days in neighboring St. John.

The passengers were terrified of being cut off from US news, and their families. But the Canadians responded with a huge amount of hospitality and warmth. (It was warm anyway, thank goodness, in September.)

About a dozen cast members, mostly unknown, play the passengers of one flight and their famous female captain; the townspeople; and miscellaneous other roles including George W. Bush. Christopher Ashley directs. The songs are by first timers, a married Canadian couple named Irene Sankoff and David Hein.

“Come from Away” is described by some as earnest and hopeful. But this isn’t “Mayberry RFD.” The Ganderians are smarter than that, and more resourceful, and though they live in an isolated place they’re not out of touch with the world. They ‘get it’ faster than the exhausted and mystified passengers. And they’re on the move right away.

There’s an indescribable charm to “Come from Away” despite the fact that it’s an ensemble, and that there are no big “eleven o’clock” songs. You will not come out humming. The songs, as such, are sort of a continuously pleasant loop. But I do think the ensemble is so well directed, and energized, that they manage to infect the audience with a real sense of pathos about the situation.

Also, and this to thanks to Sankoff and Hein’s book, there’s nothing maudlin going on. Indeed, the words “World Trade Center” aren’t uttered almost until the very end. Instead of exploiting the various 9-11 cliches, the pair concentrate on what’s happening in Gander. You learn just enough about the passengers and the townspeople to follow their brief adventure together and care about it.

Among the standouts: Q. Smith as the mother of a missing NYFD firefighter, on her way home from a vacation; Lee McDougall and Sharon Whealtey as a mismatched couple who meet on the plane; Chad Kimball and Caesar Samayoa as a gay couple; and Jenn Colella as the captain of the flight. (All the actor play multiple roles.) For awards consideration, Kimball and Colella will likely go into featured categories. But the whole cast should be praised. This is a show with a lot of heart. I wouldn’t be surprised if it turns into quite the little surprise hit of the season.