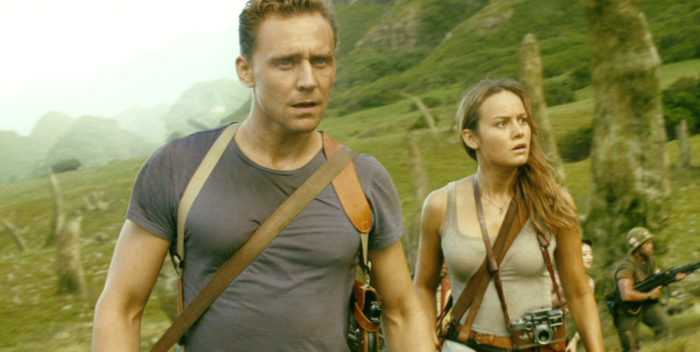 “Kong: Skull Island” opens tonight and expect Warner Brothers to add to their financial coffers in a massive way. Bottom line, Kong comes through like the chest beating and at times endearing icon he is. The human actors, including Tom Hiddleston, Samuel L. Jackson, Brie Larson, John Goodman, Corey Hawkings, John Ortiz and the always funny John T Reilly, all play their predictable parts with dimension and personality. “Kong,” directed by Jordan Vogt Roberts, is most definitely a gloried B-movie, and it smartly knows exactly what lane it’s supposed to be in, which shows from the first scene.

The story, written by Dan Gilroy, Max Borenstein and Derek Connolly, borrows from the 1933 “King Kong” original but revamps it a bit to take place in the turbulent 70’s (the soundtrack is first rate from the beginning, starting with Jefferson Airplane’s “White Rabbit”). Starting with the crusading scientist, (John Goodman) convincing the reluctant US government to allow him and the US military to trek out to an uncharted island to get to the truth of the massive monste, (a multitude of monsters as it turns out.)

Hunky Hiddleston is the professional tracker, Jackson is the macho officer in charge, Larson is the feminist anti-war photographer who hitched a ride on the helicopter in order to document the journey and always reliable Reilly is quippy as the stranded WW2 Veteran. The spectacular effects, by Industrial Light and Magic, are first rate, engaging, frightening and fun. The photography and the direction of this story are too, because every piece checks off its box with cheeky and at times way scary perfection.

So you have an old school monstrous B-movie being relevant once again (the last one was Peter Jackson’s in 2005) which by judging the rapturous reception it got last night at the premiere in LA where I saw it, fans in 2017 will most certainly flock to.