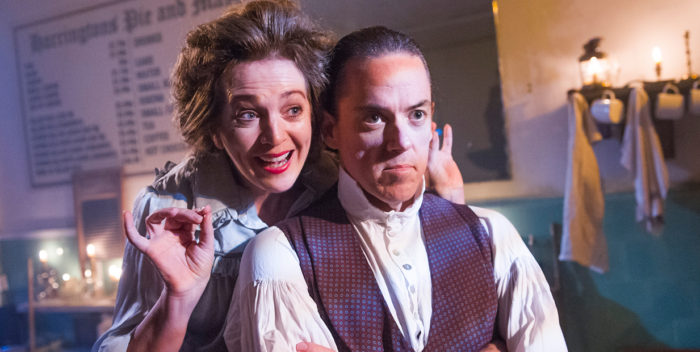 “Sweeney Todd,” my favorite musical, has arrived from the UK in its most stripped down version ever at the Barrow Theater in the West Village. And I mean stripped down– there are 8 actors, 3 musicians, and 130 people in the audience all sitting at communal tables as if they were in Mrs. Lovett’s pie shop.

The Barrow is very, very small. And the communal tables, as it were, are set in long rows. Before the show, pies are served or sold, I’m not sure how that worked. They are meat or vegetarian. There are none stuffed with priests or friars, which is just as well.

In my little section last night, Stephen Sondheim sat directly in front of me. Bernadette Peters was a couple of seats away Everyone is very close. There is no stage, really. The show was originally staged in Harrington’s pie shop in a village outside of London called Tooting. There were 32 seats. The producers have recreated Harringtons in the Barrow Theater, using clever lighting and some special effects to create Mrs. Lovett’s pie shop, Sweeney’s barber shop, and the ovens below.

The result is quite extraordinary and shocking. “Sweeney Todd” is a big musical, with a chorale and a booming orchestra. Somehow, director Bill Buckhurst has drastically reduced the size while keeping the show large. His version of Sondheim’s masterpiece lives up to all the great productions that have preceded it over 38 years.

Sondheim loves the show. He’s seen it at least five times, I was told. Last night, he leaned forward in his seat, smiling widely, when Siobhan McCarthy made her entrance as Mrs. Lovett. She is a gem of an actress, a comic genius who gives Mrs. Lovett a whole new lease on life. She and Jeremy Secomb, our Sweeney, have come all the way from Tooting and the pie shop to this incarnation. Secomb, who will go back to playing Javert in “Les Miz” in London after April 9th, is a sensation singer with matinee idol looks. It’s impossible to believe he’s never been on Broadway.

These two are matched evenly with Matt Doyle and Alex Finke, respectively young lovers Anthony and Johanna. The latter brings sharp comic timing and winsomeness to Johanna. Doyle– well, he gets to sing “Johanna,” one of Sondheim’s incredible classics, and is sensational himself.

The rest of the cast is all top notch. Except for Brad Oscar, who’s playing the Beadle, they will all leave on April 9 and be replaced by Americans. Broadway starts Norm Lewis and Carolee Carmello will take over the leads. Carmello was there last night, observing. I can’t wait to see them– Lewis is maybe Broadway’s best and least known musical star. But for the time being the Tooting Players are overnight stars.

I could rattle on and on about “Sweeney Todd”– very hard to ruin, but a very complex show musically and structurally. How all the pieces fit together still amazes me. Watching with Sondheim was like sitting with God and asking him How’d ya do it? You can’t ask him that. You just have to appreciate its genius. A nice way to come home from the Oscars and the end of awards season!