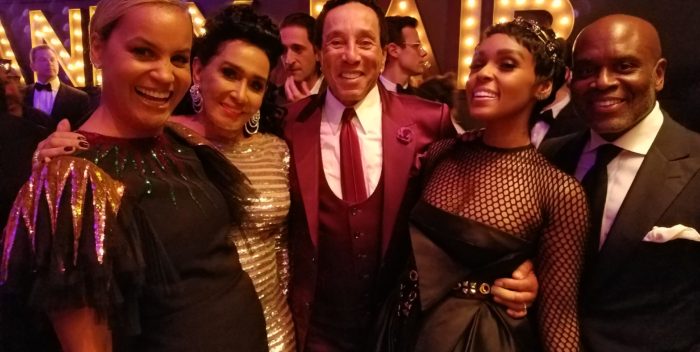 Vanity Fair’s annual all-star Oscar party was bigger and more crowded than ever. The In-and-Out Burgers were flowing, and so was the Dom Perignon as Oscar winner after Oscar winner, as well as Hollywood’s hottest A list, poured through the front doors of the landmark Annenberg Center (formerly the Beverly Hills Post Ofice) to the sounds of a Mariachi band on Santa Monica Boulevard.

Oscar nominee Michelle Williams arrived with her pal, the very funny actress Busy Phillips. The latter told me what it was like to sit at the lip of the stage when all hell broke loose at the Oscars: “We were sitting next to Ben Affleck, and I kept saying to him, Can’t you do anything? You’re…important!”

The stars were all around. To the left: Justin Timberlake and Jessica Biel chatting with Ciara and Russell Wilson, to the right LA Reid and his wife Erica hugging Smokey Robinson. The age range went from 8 year old Sunny Pawar to the very legendary Martin Landau. In between, you  could see Amy Adams, Vin Diesel, Patricia Clarkson, Lucas Hedges (and his father, Peter– the writer-director who wrote “Gilbert Grape”), all the ladies from “Hidden Figures” plus Viola Davis clutching her Oscar.

Toward the end Casey Affleck and Kenny Lonergan came over from the Amazon party at Delilah, plus David Furnish arrived from their annual EJAF Oscar dinner, and so on. Armie Hammer told me all about his new movie coming later this year from Sony Pictures Classics, and Sia came in a huge headdress. Quincy Jones sailed past all of them.

The Vanity Fair party can only be explained this way: take every famous or important person who’s around and pu them in an enormous glass box, then shake. Faye Dunaway arrived with two friends fresh from the Envelope disaster. “It wasn’t my fault!” she cried. It wasn’t. And Faye was accepting kudos for getting out of the Dolby Theater alive and in one piece. She was the one who said “La La Land” without realizing that it was wrong.

Meanwhile “Moonlight” director Barry Jenkins– finally finished with press, and in a daze– wolfed down an In and Out Burger as various tuxedo clad men came over to offer him the moon and the stars. “Just say the world, I’ll fly you there,” said one. It’s nice to be King! Was he shocked, I asked? “Shocked,” he said, and fell into a couch.

Dev Patel arrived with the “Lion” guys, Andrew Garfield took a lap, Katy Perry kicked up her heels, and Mariah Carey ran into Pharrell Williams (more on that later). You get the picture: everyone was there. Literally everyone. And even at 2am, some of them were still there. In and Out had changed over to Bouchon Bakery, which handed out the most delicious vanilla milkshakes in small glass bottles, and tiny sweets that melted in the mouth.

And where was everyone going now? “I guess we’re going to Madonna’s house,” shrugged Kenny Lonergan, holding his Oscar for writing “Manchester by the Sea.” “I just wish,” he said, “when they said they made a mistake on stage, it was Manchester.” He laughed. Ruefully.