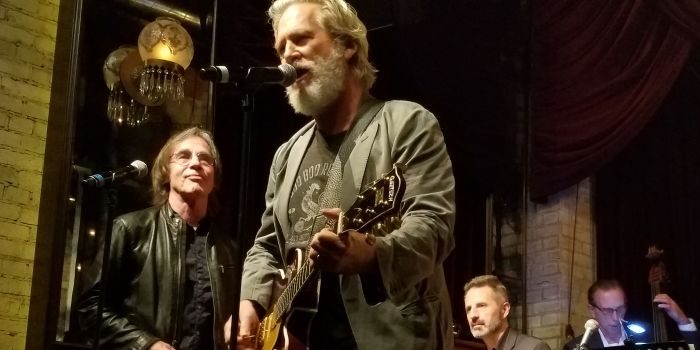 Jackson Browne curated the amazing night– called “Songs from the Cinema”– at a small club in Fairfax Village called the No Name. But there were plenty of names. Quincy Jones was the evening’s sort of honoree, or at least oracle, while celebs like Petra Nemcova, Maxwell, and actor Jeremy Renner waited tables for the $2,500 a plate dinner prior to the all star concert.

Among the performers: Moby, Rita Wilson, Bridges, Judith Owen (who stole the show with “Goldfinger”), Black (doing a number from “School of Rock” as if his life depended on it), Jonathan Wilson (tremendous version of Bob Dylan’s “Billy 4”),  Jenny Lewis (in a gorgeous duet with Jackson Browne), and Browne himself who gave Leonard Cohen’s “A Thousand Kisses Deep” a soulful and memorable reading.

Among the guests was Olivia Harrison, widow of Beatle George, who danced up a storm with Jeff Bridges, his wife (as he noted– now 40 years), and Rita Wilson and pals. Rita got big points for leading the crowd in ABBA’s “Dancing Queen” and on a song she wrote and sang in “My Big Fat Greek Wedding 2” called “Even More Time” that recalled the likes of Bonnie Raitt and Linda Ronstadt.

There were some not as famous singers too, who made big impressions including Catero Colbert, whose Philly R&B take on the Delfonics’ “Didn’t I Blow Your Mind This Time” was wonderful, plus Haitian singer Paul Beaubrun on “Over the Rainbow/Wonderful World.”

The versatile, knockout house band for the night is called the Hot Club of Los Angeles. If you live there, find them online. They are a gem, discovered by Jackson Browne playing a local bar.

As for politics, Jack Black got the biggest ovation of the night, urging Meryl Streep and other stars to keep talking about Donald Trump. But the focus of the night was on Haiti, and the continuing work that has to be done there.  When Haggis ran a short fundraising moment, several hands went up, but the biggest donation came from Bridges, who pledged $50,000 a year for the next five years. That got a lot of applause.