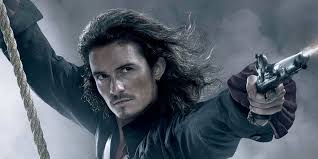 Disney — which just had the biggest year any studio could hope for– is tuning up for the 5th “Pirates of the Caribbean”  film to be released on July 7th. Johnny Depp — sorely in need of  a hit– returns as the star with a big cast including Geoffrey Rush and Javier Bardem. Paul McCartney is said to have a cameo role.

But the real question is what happened to Orlando Bloom’s Will Turner, aka Davy Jones. Bloom was heavily featured in the first three “Pirates” movies, but was absent from Chapter four. It’s been announced that he’s in “Dead Men Tell No Tales,” but no one knows much about it.

SPOILERS AHEAD Now I’m told that Bloom will appear just in the beginning of the new film as a set up for his son, played by Brendan Thwaites. He also appears again at the end, possibly as a set up for a sixth installment that will focus on father and son. (Of course, Depp’s Jack Sparrow will never be far from sight.) This should be a kind of Sean Connery moment for Bloom (think Indiana Jones and his dad) although of course he’s far younger. No one makes a better swashbuckler than Bloom.

(PS Off subject a little– isn’t Michael Apted ready for a Governor’s Award from the Academy?)