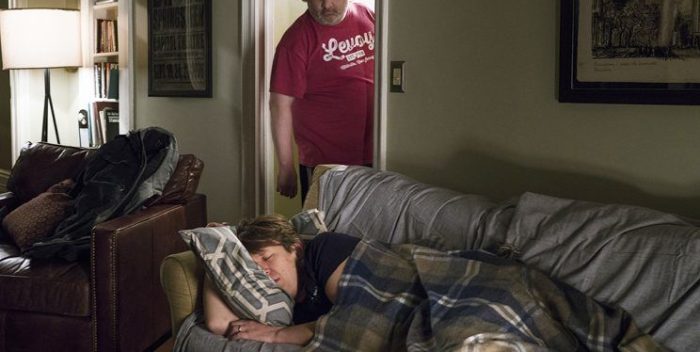 Stand up comedian Pete Holmes’s “Crashing,” premiering on HBO this Sunday, Feb 19th, is bound to be another quirky, albeit raunchy and genuinely sweet at times, hit for them.  Pete plays Pete (‘natch) a truly likeable, Bible-believing guy, who is also a struggling stand up comic braving the rough and tough NYC comedy circuit.

In the first episode, Pete finds his wife (the terrific Lauren Lapkus) in bed with her new age guru called Leif (played hilariously by George Basil).  Pete then finds refuge on a fellow comedian’s couch, the impatient, cynical and screwed up, but endearing Artie Lange.  Lange joked at the recent premiere in Hollywood, “I can’t believe I’m here. I look like a chubby jewel thief.  A year ago I was in rehab.”

Standing next to Artie was the Hollywood comedy honcho Judd Apatow who is the Executive Producer, he directed the pilot episode as well.  Jimmy Kimmel made a surreptitious late entrance to support his longtime pal Pete but I did manage to ask him if he was ready for the Oscars. Kimmel quipped, “God I hope so.”

Apatow– the executive producer of HBO’s “Girls,” which premieres its final season right before “Crashing”–hopes that the audience will appreciate all the comical facets of Pete’s story.  “If you have somebody like Pete who’s willing to tell you every horrible thing he’s ever done or thought, there’s a lot of comedy there because we all relate to that struggle.”

Gina Gershon, who is hilarious in the second episode (as well as the very funny and biting TJ Miller) told me she wants to do more comedy: “I’m so enamored of Tina Fey, Amy Schumer, Sarah Silverman.  I’d love to work with them all.” Will we see Gina reprising her very funny role on Larry David’s “Curb Your Enthusiasm” as the Hasidic dry cleaner?  “I’m trying to squeeze myself back on there. Whenever they will have me on, I’ll come on. “

I asked Pete about the recent Friars club brouhaha. “No way, really? That means the next roast will be hilarious, all these inside bookkeeping jokes.” Why did he shoot in NYC and not LA?  Pete replied, “Comedy and New York, neither of them want you or need you.  So if you leave comedy or New York, it doesn’t notice. “