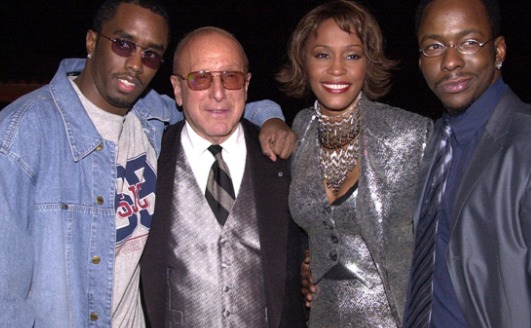 Five years ago this afternoon, right about now, I got a call from the desk downstairs at the Beverly Hilton. I was getting ready for Clive Davis’s annual pre Grammy show. Ray Davies had just finished rehearsal. Tony Bennett was next.

And the voice said: “Mr. Friedman, Whitney Houston has died one floor above you.”

Within two hours, all the media in the world descended on the hotel. At the same, the Grammy guests were piling into the lobby. It was too late to cancel the show; the guests were already on their way. I have no report from that night because it was published elsewhere and has since been removed. But what I remember mostly was a beautiful speech from Sean Puffy Combs, and Clive showing video of Whitney from past years.

Everything else is a blur. I do remember being back in the lobby when Bobbi Kristina was taken out by paramedics. After being upstairs for too long with her dead mother, the poor girl freaked out. She would never be the same.  And now she’s gone, too.

The spirit of Whitney will be hovering over tonight’s party. Whitney is never far from anyone’s mind because of her long association with Clive Davis. Her band leader, Rickey Minor, is still running the show. (Two years ago Mike Ahearn, who used to run the show, also passed away. A lot of other people have left us, too, like Jackie Collins and Joan Rivers and Dick Clark and Merv Griffin– always regulars at this event.)

Here’s to Whitney. When I first met her she was young and full of mischief. She was a superstar with a powerhouse voice and a fame and that was so huge she could not get control of it. She never did. She hadn’t met Bobby Brown yet, but that accident was around the corner, and the bad elements of that relationship exacerbated all of her fears and doubts. But the real Whitney, with a clear head, was a remarkable artist and a great girl.  She will really be missed tonight.