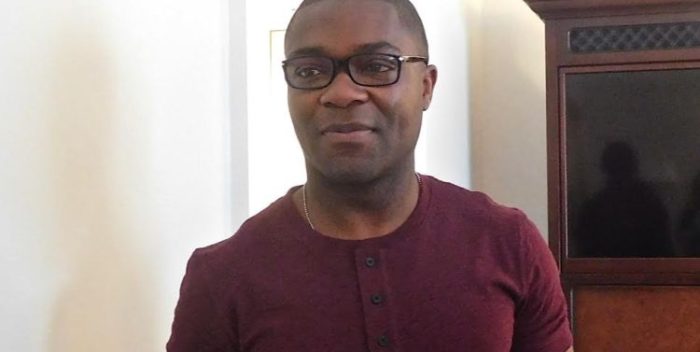 Fresh off his stunning off Broadway success in “Othello” with Daniel Craig, the charming and very buff David Oyelowo joked with journalists this week at a press junket for his new film, “A United Kingdom.” The “Selma” actor stars as another real-life historical person in the drama about a mixed-raced couple by Amma Asante, who directed the brilliant “Belle” a few years ago.

“A United Kingdom” is the true love story of King Seretse Khama (Oyelowo) of Botswana, who attends college in London and falls for a middle-class white woman, Ruth Williams (Rosamund Pike) in the late 1940’s just as apartheid was being introduced in South Africa. The romance and subsequent marriage was a big deal and caused an international political crisis on both sides of the divide. Despite efforts by their families and governments to tear them apart, the couple remained steadfast in their devotion and marriage until Seretse’s death and their story, which is little known nowadays, is engrossing and hugely inspiring.

The opening scenes of “A United Kingdom” feature Oyelowo as Seretse in a boxing ring going a few rounds against an unscrupulous rival. Oyelowo is naked to the waist and has an enviable six-pack.

Asked what he did to get in shape for the boxing scenes, Oyelowo noted that Seretse was athletic. “He boxed at university. You don’t want to start a movie with boxing and look like Dr. King, as much as I love Dr. King,” he laughed, adding, “This tends to be the shape I’m in. Most people came to be aware of me as I was playing Dr. King when I was 30 pounds heavier than I normally am, so it’s wonderful,” He laughed, “Now every time people see me they go, ‘You look good!’”

Oyelowo said from the moment he read the book on which the movie is based, “Colour Bar: the Triumph of Seretse Khama and his Nation,” by Susan Williams, he was determined to get a film made. “I couldn’t believe I didn’t know about the story.”

The movie’s themes resonated with Oyelowo on a personal level. “He (Seretse) comes from royalty and so does my father. He’s a Nigerian prince and he’s Yoruba, one of the main tribes in Nigeria and he married my mom, who’s Igbo, and that’s quite taboo, and she’s a commoner, so they eloped to the UK in order to be married and be together. It’s on a much smaller scale” than what transpired with Ruth and Seretse, but Oyelowo noted, “It was probably in the back of my mind as I was reading this story.”

“But as someone who’s in an inter-racial marriage myself,” he added, “when I happened upon this story I found myself feeling huge relief that me – myself and Jessica (Oyelowo) – that I didn’t have to go through what they went through,” he said. “I find it admirable how they stuck to their guns.’’’

Oyelowo’s wife Jessica Oyelowo, has a small but noticeable role in “A United Kingdom” as the snooty wife of a high-ranking British diplomat who does all he can to put roadblocks in the way of the lovers. Was if fun being the film with his wife? I added that his beautiful wife, with whom he has four children, is very good.

“Too good I think playing that racist lady, don’t you think?” he laughed.

As for what’s ahead, Oyelowo is taking a break from substance-oriented historical movies and people suffering, even if he’s not exactly slipping into “Hangover” territory.

“I have an action comedy coming out later this year that Nash Edgerton directed and that’s with Charlize Theron, Joel Edgerton, Thandie Newton, Amanda Seyfried, Sharlto Copley, and trust me,” said Oyelowo, “there’s not a historical speech in sight. It’s me playing a fool and having a lot of fun, and then, yes, the J.J. Abrams ‘Cloverfield’ film [called “God’s Particle”], with no speeches, and no black people are struggling in that film either.”