So now maybe we know the secret of Donald Trump’s locks that look like lox: he takes Propecia for hair loss.

So says his long time doctor Harold Bornstein, who probably said too much to the New York Times. Bornstein, whom I knew very well in the 1980s and 90s, told the Times the reason Trump’s PSA levels in his prostate are so low is because he takes Finasteride. Bornstein also says he’s unhappy because people are laughing at him, and throwing things at his windows. Oh, Harold, good lord.

I know two people who take Propecia, or Finasteride. One takes it for hair loss has done pretty well. The other takes it for prostate issues and is fairly bald. So, who knows? (I gave up a long time ago on hair loss.) 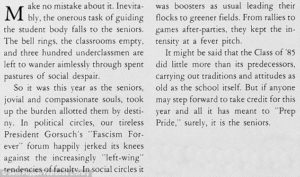 In other news: the Washington Post reports that Trump got into a fight with and hung up on the Prime Minister of Australia, one of our oldest and closest allies, over a “dumb deal” concerning refugees. He also offered to the Mexican president to send troops into his country to “stop the bad hombres.”

And the Daily Mail is reporting that Trump’s pick for Supreme Court Justice, Neil Gorsuch, had a club in his prep school called Fascism Forever.

I’m sure there’s more, there’s something almost every hour that’s totally frightening and bizarre. Like The Nation has a scoop about a leaked draft of Trump’s religious agenda that could set us back several thousand years.

Meanwhile, back to the Washington Post: they sent a reporter to West Virginia to talk to Trump supporters. I don’t want to make fun of them, but either they’re illiterate or willfully stupid. Can they read? Can they listen? Do they not understand what’s going on? It’s like they’ve been hypnotized into stupidity. Wake up, West Virginia! I know you can do better than this.