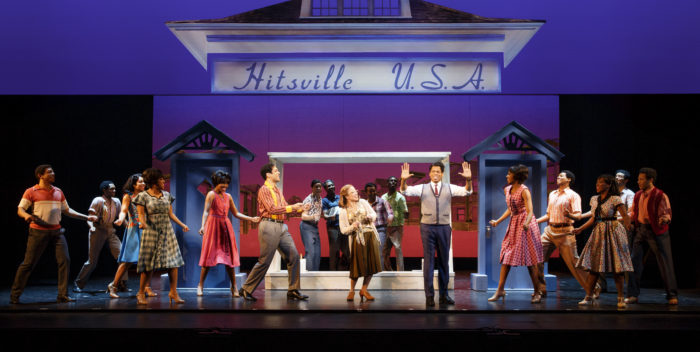 “Motown: The Musical” returned last night to the famed Pantages Theater in Hollywood, after two long runs on Broadway and a national tour.

This new streamlined version of “Motown” features more than 40 classic hits from the record label’s glory days, and tells their story through founder Berry Gordy’s eyes. The show is over-the-top-fun, energetic, exuberant singing and dancing.

The Motown royalty came out in force last night. Sitting in front of me was the indefatigable Motown founder (and a producer on the show) Berry Gordy with his cohort Smokey Robinson, and Gordy’s one time assistant turned noted Producer Suzanne de Passe (she curated the Jackson 5.)

When I asked Smokey how many times he’s seen the show, he quipped, “I’ve lost count,” to which Berry laughed and agreed. “Not sure how many times. But I discover something new every time I see it.”

Smokey and Berry did crack up many times throughout and the packed house was as entranced by the show as they were. Special kudos to Chester Gregory as Gordy and the luminescent Allison Semmes as Diana Ross. The show runs through Feb 12th, and will tour after that. Everyone will love this show, guaranteed.