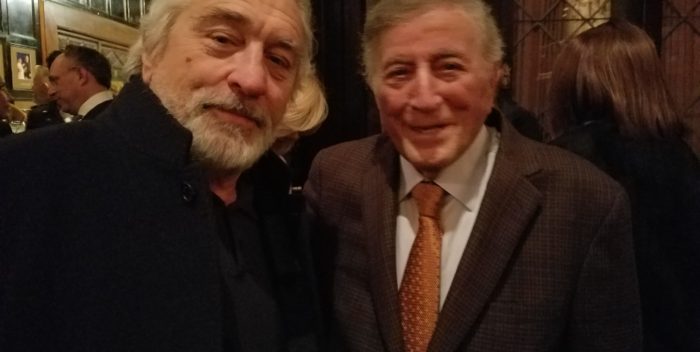 So much going on last night at the buzzy premiere of Taylor Hackford’s movie “The Comedian” starring Robert DeNiro and Leslie Mann:

Tony Bennett and his wife Susan were the top guests at the after party at the Friars Club. Tony tells me he’s taped an intro for Lady Gaga’s Super Bowl appearance on Sunday. Tony and Gaga are gaga about each other! They’re planning a follow up album to their hit “Cheek by Cheek,” he says, with Wynton Marsalis. “It’s going to be big band swing music, with lots of songs by Alan and Marilyn Bergman.”

When I told Tony that Bob Dylan is about to release three CDs’ worth of great American songs, he did not react. I give him credit. He’s a diplomat. He just said, “They’re amazing songs. I love them,” he said, as if all of Cole Porter, the Gershwins’ and Rodgers and Hart’s compositions were his children. I asked the 90 year old legend if he ever gets tired– he’s about to go on tour again. Susan replied: “If you sang like Tony Bennett, would you get tired of it?” Good question!

Hackford’s very funny film is written by two Friars– Jeff Ross and Lewis Friedman. Hackford is also a long time Friar. Despite recent upsets, the Friars Club prevails. When I arrived early, I was sent to the bar where none other than Dominic Chianese, Uncle Junior from The Sopranos, was hanging out, just because. What’s he up to? “Music!” he declared. Dominic is a terrific vocalist– you may recall him singing in Artie Buco’s restaurant on “The Sopranos.” So who else was in the bar? Artie Buco himself– John Ventimiglia. Now, that’s a bar.

Also on hand: Helen Mirren aka Mrs. Hackford who told me “you never know” if she’ll wind up playing Queen Elizabeth again  for Peter Morgan and Stephen Daldry on “The Crown.” She’s won the Oscar and the Tony for playing QEII. An Emmy doesn’t seem so far fetched. She told me she’s a huge fan of the Netflix series. “I love Claire Foy!” she said. “I think she’s wonderful.” Well, we all do!

Judd Apatow accompanied his wife, Leslie Mann, who plays DeNiro’s romantic foil in “The Comedian” and gives as good as she gets. Tony Gilroy also joined the group. In the main room, songwriter Valerie Simpson stopped and took a picture with Tony Bennett. DeNiro and wife Grace greeted everyone, and DeNiro reiterated for me his passionate opposition to Donald Trump– this we have most definitely in common.

“Please,” he said, “he’s not a New Yorker, no one ever thought about him before.” He’s right– other than illegally knocking down Bonwit Teller and fixing the Wollman skating rink, Trump was never a person of substance in New York. People in the Rust Belt who’ve been conned by him don’t realize this.

Helen Mirren concurred: “History will not treat him kindly. He doesn’t realize it’s not his followers who will be writing his history.”