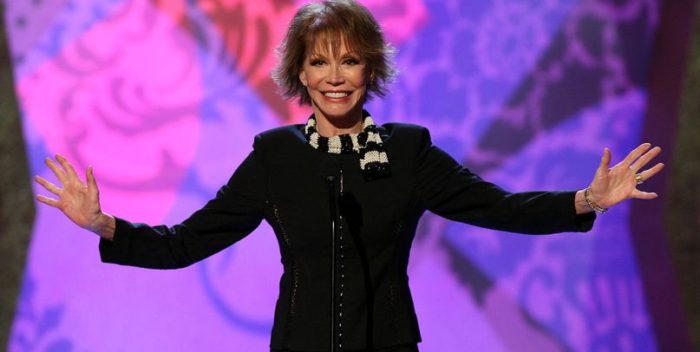 Twitter and Facebook are full of memorials and toasts to the great and beloved Mary Tyler Moore. Some people have yet to weigh in including Valerie Harper and Betty White, but that may be because they are grieving in private. (Can you imagine people still do that?)

Rose Marie, who’s 93, played Sally Rogers on “The Dick Van Dyke Show.” She gave an interview to Scott Feinberg, and said she was in touch with Mary regularly until four or five months ago.

When I ran into Ed Asner during Golden Globe week, I’d asked if he’d heard anything new about Mary. He said from what he’d been told, she was in bed and in decline, but that was all.

Indeed, not much had been heard from or about Mary recently which was a bad sign. She and husband Robert Levine had moved to Greenwich, Connecticut to be near doctors and the very good hospital there. They’d long ago given up their farm in Millbrook, upstate New York, and an apartment in the city.

Mary’s casts, particularly from her own show, had longevity in real life. Carl Reiner is 93, Dick van Dyke is 91, Betty White is 95. The only member of the “MTM” cast who passed before Mary was Ted Knight. Everyone else is still alive and kicking.

What you may not remember: the first year of the “MTM” show, Mary was nominated for an Emmy Award but didn’t win. Valerie Harper and Ed Asner each won Best Supporting honors. They took out an ad in the trades that read: “Without her, it would just be called The Show.”

Cloris Leachman: The picture that we all have of Mary, that’s how she was—sweet, kind, so tender, so delicate. She was America’s sweetheart. We loved you.

Ed Asner: A great lady I loved and owe so much to has left us. I will miss her. I will never be able to repay her for the blessings that she gave me.

Dick van Dyke: There are no words. She was THE BEST! We always said that we changed each other’s lives for the better. I…