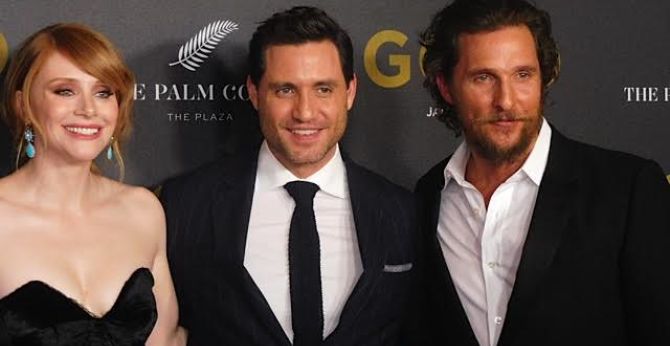 In “Gold,” Matthew McConaughey is snaggle-toothed, has a beer belly and a receding hairline. At last night’s premiere of “Gold” in New York, Gaghan told me the actor came up with the look for modern prospector Kenny Wells himself — which was inspired by his father and his business partners who sold materials in the oil business.

On the red carpet, McConaughey, who speaks in a thick Texan drawl, told me he started preparing and getting into Kenny Wells’ life for a while, eating as his character would, some of which involved cheeseburgers.

“I looked up into the mirror one day and noticed that I’d put on about 18 pounds, so like, ‘Well this is okay, that’s right.’ This is who Kenny Wells is, a consumer. Life, food, drink, smoke, everything! And then I looked back at my own life and the Kenny Wellses I’d met through my dad,” said McConaughey. “They were all large, physically almost larger than life. Kenny’s not fat. Kenny’s full. He’s a full man. When I say consuming, like they were all kind of heavy, burly and strong and they weren’t people who looked in the proverbial mirror. Most of them didn’t live past 60 years old either. Some of them died of heart attacks early because of their lifestyle.”

There were a few celebs in the mix last night other than the cast, an eclectic group that included Salman Rushdie, famed songwriter-performer Valerie Simpson, R&B star Freddie Jackson, and Tony winner Lena Hall. Oscar winner Paul Haggis brought six people who’d won an auction for his Haiti charity Artists for Peace and Justice. Haggis, an exec producer on “Gold,” had developed the script early on.

“Gold” co-stars Bryce Dallas Howard and Edgar Ramirez were stuffed into a corner of the Plaza Hotel’s Palm Court later for the after party, where Weinstein Company co-president Bob Weinstein held court literally. (This is his movie, from the Dimension side of the company.) Howard, who is finally ramping up her career, has a big blonde teased hair do as Wells’s girlfriend, a waitress. We thought it was a wig.

“It’s MY hair!” she shouted back over the din over disco music. “You should play an an all out floozy sometime,” I responded, impressed.

Bryce shot back a wide grin. “With a heart of gold!”