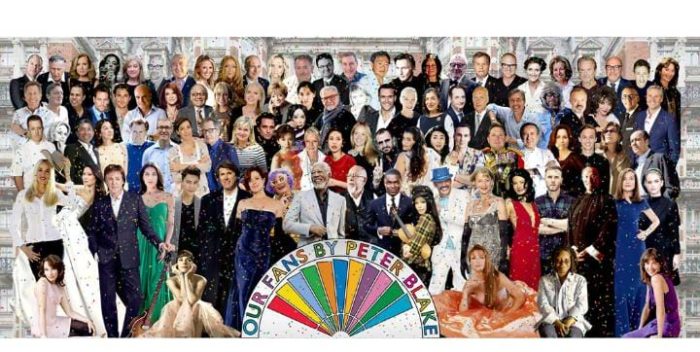 Believe it or not, “Sgt. Pepper’s Lonely Hearts Club Band,” the greatest album of all time, turns 50 on June 2nd in the US (June 1st in the UK.) The very famous cover was made by artist Peter Blake. It’s probably the most parodied cover in rock history.

Now Blake has sent himself up with a 2017 edition mural to cover the Mandarin Oriental Hotel in London during renovations. The massive blow up features celebrities who regularly stay in the hotel from Sigourney Weaver and Morgan Freeman to David Oyelowo and Dame Edna.

But look who else made the cut– Sir Paul McCartney and Lord Ringo Starr, the surviving Beatles. In fact, if you look closely, Ringo really got a nice spot in the center on the front panel. Paul’s portrait, which is larger, appears on the side panel. This is as close as Sgt. Pepper’s Lonely Hearts Club Band can come to getting back together again.

There are 100 celebs on the mural, and it’s an eclectic group that also features Jane Seymour and Helen Mirren. See how many others you can ID.