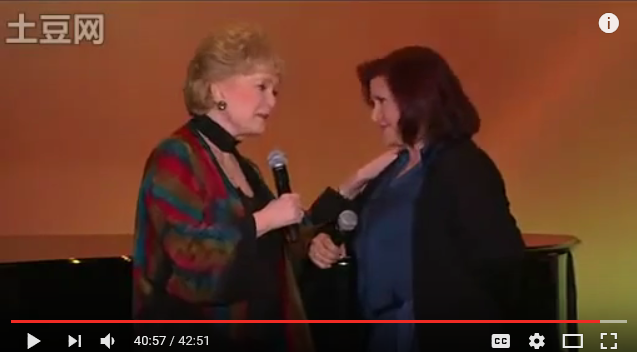 In the summer of 2008, I received a press invitation that could not be ignored. On the way to Broadway, Carrie Fisher was appearing at the Hartford Stage in her new one one woman show, “Wishful Drinking.”  As the theater critic for Connecticut’s WMNR 88.1fm, Connecticut Critics Circle, and a member of the board of the Outer Critics Circle, I was eager to be one of the first to see this witty writer and impressive actress talk about her life. A dear friend agreed to drive my husband and I to the theater, which was about an hour and a half from where we lived. Never knowing how heavy  the traffic would be, we left early and arrived well before 8pm curtain time.

We were escorted to our excellent front seats by tall figures dressed in outer space costumes a la “Star Wars.”

As I looked around the empty theater, I saw a lady sitting by herself. I was overcome with emotion when I realized that it was Debbie Reynolds. I had followed her career since I was a teenager, and had seen her perform, but had never met her.  Now, here she was in person, as pretty as the pictures I had fervently perused in the glossy movie magazines of the 40’s and 50’s.  I sucked in my courage and climbed up to her perch.

“Ms. –Debbie”–I said quietly. “It is a thrill to meet you.” She laughed and responded with a natural smile. I explained that I was a critic. ‘Thank you,” she said, “Thank you for coming.”

I didn’t want to mention how upset I was when she and Eddie Fisher divorced when he was cheating with Elizabeth Taylor.  Or how she was left bankrupt when Harry Karl gambled away all her money. I never realized that those subjects as well as her fight with bi-polar symptoms would be discussed thoroughly in the show by Carrie with a charming sense of humor.

However I did ask, “Why are you here? A long way from home.”

“Where would I be?” she said, This is my daughter.”

By this time, members of the audience were flocking over to Debbie with their playbills outstretched, seeking an autograph.  I moved down to my seat and excitedly reported my conversation.

The show began and it was wildly funny.  Things were going pretty smoothly when all of a sudden the lights went black.  Workman came on stage, pulling wires and pipes, while Carrie had nothing to do.

In a flash, Debbie jumped  up and ran down the aisle. Climbing the steps to the stage, she immediately talked to the audience.  They cheered and clapped as she skipped merrily from side to side joking and singing with the aplomb of the seasoned entertainer she was.

The lights finally came on. Debbie returned to her seat. “Wishful Drinking“ proceeded and received a standing ovation. At the end, many people debated the same question. Was Debbie’s act part of the show? I knew it wasn’t. Carrie went on to win awards for her performance on Broadway.  Debbie may have been in the audience, but she was not on stage.

On December 28, at the age of 60, Carrie suffered a heart attack on a plane flight from London to LA and did not recover. A few days later, while her mother was planning her funeral, she died of a stroke. It was a shock, yet we knew that Debbie could not let Carrie go it alone.  She was her daughter.