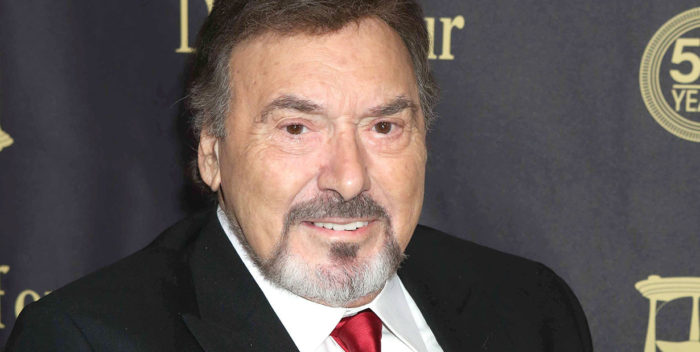 It’s not possible to have lived with a TV set for the last 35 years and not seen Joe Mascolo’s face. He was Stefano DiMera, a comic book villain on “Days of Our Lives” starting in 1982. The inside joke about Stefano was that you couldn’t kill him. His character was murdered dozens of times, and rose like a “Phoenix”– his nickname–days or weeks later.

Alas, Mascolo actually died yesterday at age 87. I met him once at the Four Seasons in Beverly Hills after some event and he couldn’t have been nicer. Gone was Stefano’s intercontinental accent. (He was from West Hartford, Connecticut, and not Italy or anyplace exotic.) He was absolutely charming, and loving his late in life fame. God bless him.

Mascolo’s acting credits string back to around 1960 but he didn’t hit his stride until 1981, when he was in a short lived Mafia type TV series. His bio also says he played clarinet with the Metropolitan Opera for a couple of years, and I’ll bet he was a closet opera singer a la Paul Sorvino. In 1982, he became Stefano, a ridiculous character that Mascolo made real — so real he drove the story on a show that used to be about a white bread middle class family from the mid west. How bizarre.

Indeed, when I was in high school, “Days of our Lives” was pure vanilla — bland white people cheating and drinking. Mascolo’s entrance brought ethnicity– something only seen on “Ryan’s Hope.” (Soaps in general do not acknowledge that Italians, Jews, Greeks, etc exist.) Mascolo was followed by John Aniston as the Greek tycoon Victor Kiriakis. (He’s still there after thirty years as well.) They were a shock, I’m sure, to middle America,

So here’s to Joe Mascolo. He was one of a kind, and certainly made daytime TV more interesting that it deserved.