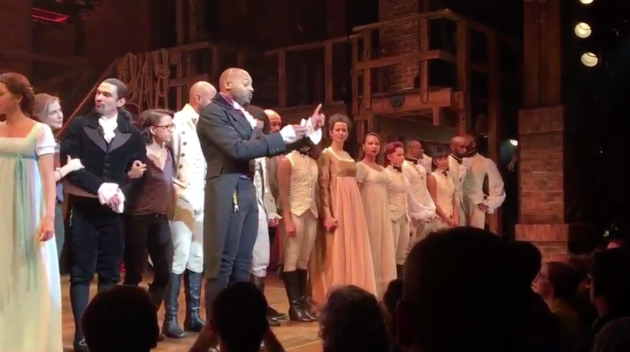 Mike Pence, the Vice President-elect, went to see “Hamilton” on Broadway last night and it was not a good experience. He was booed by the audience, sung to directly by the King George character in an unfavorable way, and endured a three minute standing ovation against him. Pence tried to sneak out during the curtain call, but was addressed by the Aaron Burr actor Brandon Victor Dixon in a kind of beautiful speech:

“We, sir, we are the diverse America, who are alarmed and anxious that your new administration will not protect us, our planet, our children, our parents or defend us and uphold our inalienable rights…But we truly hope that this show has inspired you to uphold our American values and to work on behalf of all of us,” Dixon said, while gesturing to the musical’s diverse cast and to the audience.

Tonight, VP-Elect Mike Pence attended #HamiltonBway. After the show, @BrandonVDixon delivered the following statement on behalf of the show. pic.twitter.com/Jsg9Q1pMZs

What did Pence expect? Three quarters of the Broadway community is gay. All of them are in the arts. He’s against all of it. He believes in conversion therapy for gays, among other things. He’s no doubt one of the most frightening people who could have attended a Broadway show. The current star of “Hamilton” is openly gay and HIV positive. But I get it: he longed to leave Indiana and see the world. He just didn’t realize that his views wouldn’t be met with rousing approval in the real world. Maybe this was a wake up call. Let’s hope.