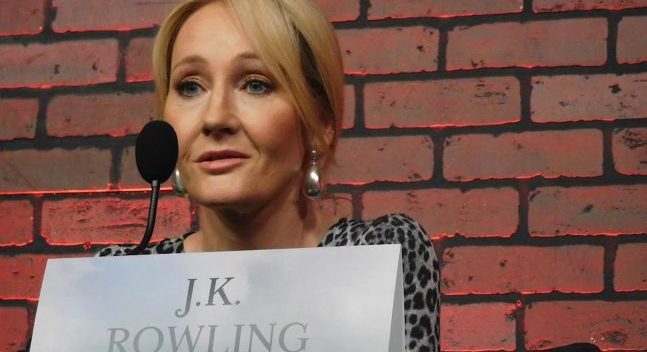 “As far as writing’s concerned I need to do it. I feel strange if I don’t write,” replied J.K. Rowling to a question about her writing process and motivation. The most successful and famous writer in the world was at a press conference Thursday afternoon for her new film, “Fantastic Beasts and Where to Find Them.” The movie, which is released November 17, is a prequel to the Harry Potter books. And most notably, Rowling makes her screenwriting debut.

“Fantastic Beasts and Where to Find Them” is based on a novella Rowling wrote for charity, which features many of the magical and extraordinary creatures now featured in the film. “Fantastic Beasts” was also one of Harry’s textbooks at Hogwarts School of Witchcraft and Wizandry, and pretend-written by Magizoologist Newt Scamander. Newt is a nerdy wizard who anchors “Fantastic Beasts” and is played by Oscar-winner Eddie Redmayne. (Redmayne attended the press conference along with co-stars Katherine Waterston, Ezra Miller, Dan Fogler and Alison Sudol, director David Yates and longtime Potter producer David Heyman.)

“Clearly I don’t need to write anymore,” Rowling told journalists and fanboys. “But I love it so much it would feel like some sort of psychic amputation if I didn’t…basically I have to write. I never forget how incredibly fortunate I am. Genuinely, I get up every day and I think I’ll do the thing I love, I have a wonderful family, I’m the luckiest person I know and I would wish the same for everyone who is out there working hard and trying to deal with life, which is tricky for all of us, no matter who we are.”

As for her writing process, Rowling said, “We flew out here yesterday evening. I can write anywhere, at any time. I can write with the TV on in the background. I can write half answering my kids’ questions. I have written a surprisingly amount of one chapter actually on the lavatory, which is the only place I could get temporary peace. And last night I was in a kind of a bleak mood,” she noted, “and I thought I need to work, so I got out the second screenplay, and I did some work on that and that made me feel a whole lot better, so I can write all the time, anytime.”

Asked how she learned to write a screenplay, Rowling conceded screenwriting was different and new and she bought a screenwriting book.

“I never read it. It just sat on my desk,” she said. “I think I felt like that was my homework, but I actually hadn’t done my homework. Maybe I just thought I would absorb it somehow by it just lying there.” Rowling added, “I was very involved with the Potter scripts in as much as I had script approval and I spoke a lot to Steve Kloves about what he was doing, so I would say Steve was my tutor,” she said of the previous Harry Potter screenwriter, who has a producing credit on the film. “That’s why I was so keen to have him attached to this project because I knew he would be the guy I could phone at 4 a.m. if I needed to.” She never needed to she laughed.

Warner Bros. is banking on “Fantastic Beasts” to be a huge success. Rowling has already written the screenplay for the second film and five are planned.

Rowling said novels remained her first love. “I’m still writing novels. This is why I look so tired – I’m writing a novel and a screenplay,” she said. Actually she looked great, not tired at all, and almost all the questions were directed at her, which she answered amiably and passionately, especially about the film. “For all the tricky bits, if I hadn’t enjoyed writing a first screenplay so much I wouldn’t have said I’d keep writing, so I’m loving it.”

There were a few spoilers at the press conference, including to a question to Rowling about whether in the next Fantastic Beasts film, Dumbledore – who was played in the Harry Potter films by Richard Harris and after his death Michael Gabon – will make an appearance as a young gay man.

“Well, I’m very comfortable with the question,” Rowling said smiling. “I can’t tell you everything I would like to say because this is obviously a five-part story, there’s lots to unpack in that relationship.”

“You will see Dumbledore as a younger man and quite a troubled man, because he wasn’t always the sage (in the film,” Rowling added. “We’ll see him in what I think was the formative period of his life. And As far as his sexuality is concerned,” she said, taking a long pause, “watch this space.”

The Beasts of course are the real stars of the film and some are adorable. Rowling said some of the creatures were always intended to be in the film. “And then we swapped a couple of beasts just because we thought it would make for more interesting escapades. But I think everyone’s going to want a Niffler afterwards. I want a Niffler quite honestly.” The Niffler is a small, black furry creature with a duck-billed platypus face and a kangaroo-like pouch. The Niffler is attracted to shiny, bright objects and hoards them in his little pouch out in the open as though this is perfectly normal.

“I can’t wait for people to see it. You know I really can’t,” Rowling said of the film. “This is just the beginning. It’s a five-part movie. I know which characters are coming back… I know what’s coming so this is chapter one and I think people will like what’s coming.”