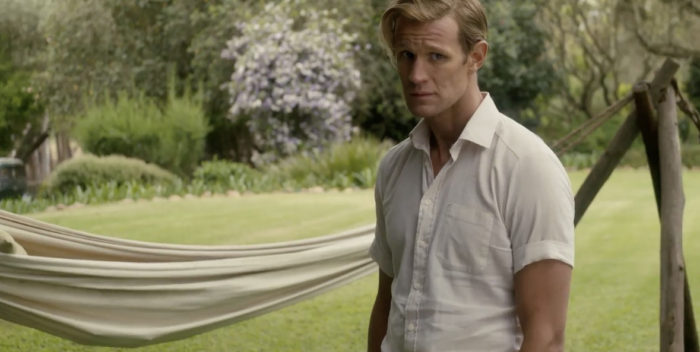 “Is it good to be the queen?” Showbiz411.com asked Claire Foy.

The 32-year-old actress plays Queen Elizabeth II in “The Crown,” the new lush and lavish Netflix series about the early years of the Monarch’s reign.

The aforementioned Morgan knows a thing or two about the subject; he’s spent the past 20 years writing about Elizabeth II, notably “The Queen” and the hit West End and Broadway play, “The Audience,” starring Helen Mirren.

At a recent BAFTA screening, Morgan sheepishly said he was not obsessed with Queen Elizabeth but just found he had a natural affinity for writing dialogue for her.

Foy was the star attraction at the junket to promote the series at the Essex House in Manhattan recently, along with Matt Smith (Prince Philip), Vanessa Kirby (Princess Margaret), Jared Harris (King George VI) and John Lithgow (Winston Churchill).

“The Crown” keeps it sexy among the Royals, casting them in a new light. Prince Philip in particular gets a major makeover and comes across as a doting dad and devoted husband. Also he comes off as a bit of a stud muffin and sleeps in the nude. (You can Google it.)

One scene that takes place in Africa while he and Elizabeth are on an official visit – and before she is Queen – shows Philip naked, sleeping on his stomach, showing off a shapely derriere.

Showbiz411.com asked Smith, who’s best known as the youngest Dr. Who in the long-running popular Brit series, what he thought Philip would say if he happened to catch that on his telly?

“Is that my bum?” Smith said laughing. “That’s the best bit of acting I did in the whole series. That’s my most truthful moment.”

As to why he felt the nudity was important in the telling of events, Smith laughed, “Stephen Daldry wanted them.”

“There’s like five or six of those shots,” Foy said. “There are quite a lot of bum shots of you,” she turned to Smith. “A crucial thing is that Philip sleeps naked. That was in the research. It’s just the fact that there are bed scenes and what do you do, put Philip in a pair of pajamas? That’s not right for the character.”

Smith added, “Would it have been the same if he’d have got up in a pair of pajamas? Is it not better this way?” (Yes we agree.)

Smith said of his character, “He was a very different man when he was young and even the man he is now. I think he’s completely misread.”

Another Royal who was often misread was Princess Margaret, played by 28-year-old English actress Vanessa Kirby, who said of her character, “Margaret died from several strokes from drinking and smoking too much and had lots of affairs and lived a full, crazy, brilliant and vibrant life but also for me, one that was tainted with so much sadness and pain and internal conflicts,” which the actress said was juicy and challenging stuff “to explore.”

Jared Harris is terrific as George VI, a man who never really wanted to be king. He dies in the second episode, but here’s hoping Harris comes back as an apparition.

Asked what he learned about the Royals that surprised him the most, Harris said that what “struck hardest home for me on this is Prince Philip, who’s probably been subject to the worst character assassination and ridicule and when you look and you see who he was back then, who he was in the beginning. I mean, what a magnificent man! He’s like a movie man. He’s a Greek god or something. He was absolutely fantastic! Also, we have a cynical attitude towards them in that we think that it’s an arranged marriage and that it’s not a sincere relationship. And then again when you look back you see that they were absolutely smitten with each other.”

Kirby asked, “Was it daunting when he jumps out of the bed in front of you starkers?”

She was referring to a scene where King George goes into Philip’s bedroom in the morning to make sure he’s properly attired to go duck hunting.

“No, I knew it was going to happen,” Harris said.

“There was another scene after that,” Harris said, where King George walks into the corridor with the valet and eventually they look at each other and go, “Bloody hell!’ – We give an idea of Philip’s being well endowed.”

The most unconventional casting in the series is John Lithgow, the only American in a key role. Showbiz411 asked the two-time Tony winner if it always his dream to play Winston Churchill?

“Never occurred to me,” he laughed. “I was astonished when I was offered the part. I’ve played FDR in my day with Bob Hoskins playing Churchill and Michael Caine playing Joseph Stalin in a television series in the early 90’s and even then it never occurred to me that I would play Winston Churchill. For one thing, Bob came up to here on me,” he pointed to his chest, “which seemed quite right and proper, even when I was in a wheelchair.”

It was casting director Nina Gold’s “bright idea” to cast him as Churchill Lithgow said. “Peter Morgan describes a certain Churchill fatigue that had kicked in. We’ve seen so many of the knights play Churchill by now. For some reason they thought this would shake up people’s expectations.”

Asked by a Brit journalist if he was apprehensive about talking on the ole of such a revered and iconic historical figure, Lithgow said, “Somewhat yeah. Not at first but when I started a couple of my British friends I could tell they were a little skeptical.”

Lithgow said Churchill helped prepare Elizabeth to be Queen. “His job was to give her confidence and make her feel like the Queen. And that’s a very general thing, the specifics are you never ask me to sit down and you never offer me tea,” lines the actor said came from “The Audience.”

As for what he thinks Buckingham Palace’s reaction to the show will be, Lithgow said, “You know it is a matter of such policy for them just never to say a thing in every area, including this. But I think this is going to be so good and so popular at a certain point somebody’s going to let slip how much they love it. And who wouldn’t want Clare Foy playing you as a young woman.”

Churchill doesn’t come off nearly as flattering. Lithgow plays him in his decline, when he was a doddering old man. He’s seems like a dirty old man in one scene. In another he stands up among his cabinet members and puts his hands down his pants for everyone to see. You can only imagine what the Queen would say to that although she’s probably wondering if Peter Morgan will ever let her alone.