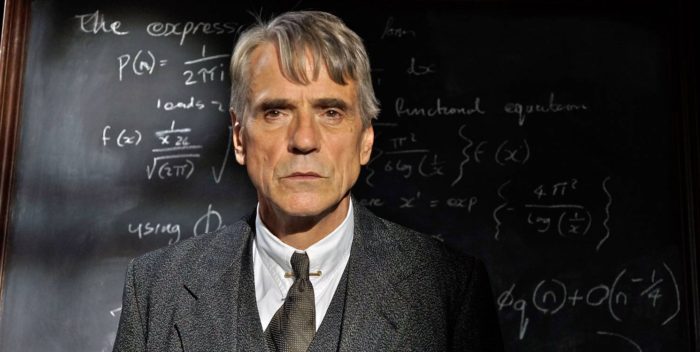 Jeremy Irons is back in the Oscar race playing famed mathematician G.H. Hardy in Matthew Brown’s “The Man Who Knew Infinity.” Last night producers Ed and Annie Pressman– who worked with Jeremy when he won the Oscar for “Reversal of Fortune”– tossed Irons a swell dinner at Bagatelle in the Meatpacking district for about 50 of their closest pals. I sat between the young Princeton math whiz who consulted on the film and Tony winning composer Stephen Schwartz of “Wicked” fame.

(At the next table, by the way, was beautiful Devika Bhise, who co-stars in the movie. She is quickly becoming a star. Last winter I met her at Lynn Hirschberg’s It Girl lunch for W Magazine in Los Angeles. Attention casting directors: she lives in New York and could be the next Priyanka Chopra– or better.)

Across the table were Neil deGrasse Tyson aka “The Man Who Knows Everything” and his wife Alice.  I asked Alice what its like being married to the Man Who Knows Everything. She replied, “I know more.” Good answer. Later, I overheard DeGrasse Tyson quizzing the Princeton math whiz,  Manjul Bhargava, about prime numbers. It was like a scene out of “The Big Bang Theory.”

Lots of New York actors were also in attendance including Bob Dishy and his wife Judy Graubart, Rutanya Alda, and so on.

Before we get to “Infinity,” what about about the upcoming “Justice League” movie? Irons is back as Alfred, loyal butler to Bruce Wayne. Alfred, who used to serve martinis and dust the Batcave, has become a lot more active in recent Batman movies.

Jeremy said: “It’s the same Batcave as in Batman vs. Superman, we used the same set and costumes. There’s not a lot for Alfred to do because there are many superheroes this time. But I do have a thing for Wonder Woman. That’s clear.”

Does she return Alfred’s feelings, I asked?

What really shows is that he’s very convincing as Hardy while in real life Irons knows absolutely nothing about math. During a short Q&A during dinner with deGrasse Tyson, someone in the audience actually asked a math question. Irons, charming as ever, and accompanied by his little white dog called Smudge, blithely answered: “I don’t know, but I do know my martini is kicking in.”