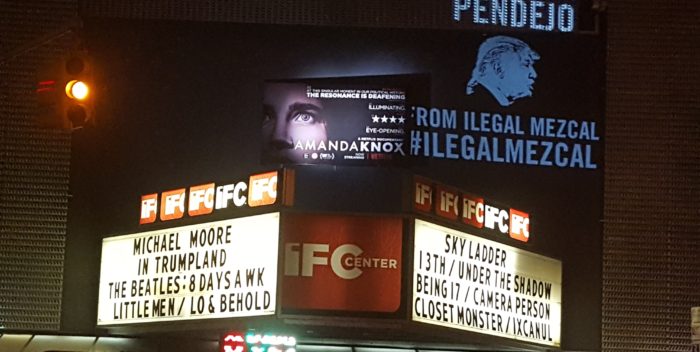 “Michael Moore In Trumpland” is not a screed against Donald Trump. It turns out to be a passionate and very humorous reasoned appeal for Hillary Clinton. Moore says he made the movie in 11 days with everything donated by Technicolor and other companies. He finished it today and screened it tonight at the IFC Center in  New York. It’s basically a 90 minute stand up routine shot at a theater in southern Ohio.

Moore touches on all of the anti Hillary arguments including the suicide of Vince Foster. “I hope she did kill Vince Foster,” he jokes. “That’s badass.” Maybe Moore will change some minds. But he’ll definitely mobilize her base.  Trumpland is partisan but highly entertaining. PS he even expresses hope that Hillary will turn out to be like Pope Francis…

There is much to like about “Trumpland,” which is named for the number of Trump voters in the Ohio primary in what is really called Clinton County. Moore knows he’s not going to win over hardcore Trump voters. But in composing the audience at the theater, he asked that 50% be either Trump voters, Bernie voters, undecideds, etc. And he plays to them, conceding that Clinton is human and asking that 50% to put aside whatever preconceived notions they have and think about what’s best for the country.

The mission here: that Moore feels deeply that Trump is more ensconced than we think, that the polls could be very wrong and that Clinton could lose the election. Living in Michigan, he sees it: no signs for Clinton, but plenty for Trump. And lots of misinformation that’s gone from being gossip to some kind of weird “truth” about Clinton. He’s afraid we’re going to wake up on November 9th with a President Trump and a Brexit-sized headache full of buyers’ remorse. That scenario is frightening.

I told Michael at the end of the screening that I had thought this film would just be a list of Trump’s shortcomings, new revelations about his failures. “But why do that?” he said. “That’s been done. We know all of it.” His idea is to motivate an apathetic constituency. It’s a smart idea.

I asked him if the Clinton campaign knows he’s made this very effective movie on their behalf. “They don’t know anything,” he said. “You’re the first people to see it.”

“Trumpland” starts today (Wednesday) at the IFC Center, then expands this weekend to Los Angeles. The movie is being made available to MoveOn.org for events, and I have an inkling that Moore is just going to make it free somehow on a television platform very shortly. It’s worth watching no matter who you’re voting for…