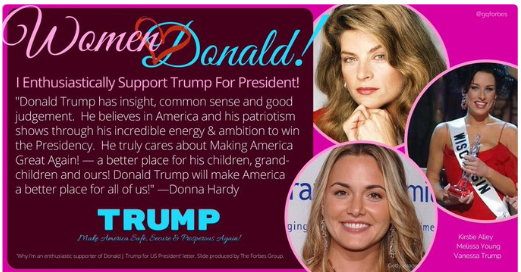 "@Jodygirl1010: @realDonaldTrump I am a woman who continues to support & stand with #Trump! #dtmag pic.twitter.com/nFmY3FJuEf" Thank you.

Only one problem. Kirstie Alley, Scientologist and not brightest bulb in the chandelier, is now a FORMER Follower. She un-endorsed him last night:

So even Kirstie, who believes in Xenu, and John Travolta, and L Ron Hubbard, has dumped Trump. And he still wants her!