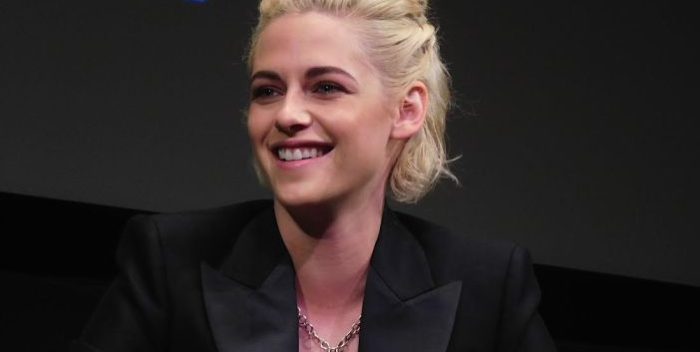 Kristen Stewart arrived 15 minutes late on Thursday to a press conference for “Personal Shopper,” one of her many films this year. She was met by a round of applause. “I was on time. He was early,” she joked, and pointed to director Olivier Assayas.

“Personal Shopper,” which screens at the New York Film Festival, reunites Kristen Stewart with French director Olivier Assayas. They had great success with their last film, “Clouds of Sils Maria,” which earned the actress both a Cesar and a New York Film Critics Award.

The film is a supernatural thriller in which Kristen Stewart plays Maureen, a personal shopper who obtains pricey and chic outfits for her what seems her one high-profile customer. She also communicates with the dead and is desperately trying to reconnect with her twin, who recently died of a heart attack.

During the press conference for the film Thursday afternoon, the director said of his rapport with Stewart, “What’s extraordinary with Kristen is how smart she is in understanding the most intricate complexities of cinema, of filmmaking, of what is going on with the shot. She recreates the character from the inside and she does it knowingly, but at the same time she’s guided by her body.”

“Literally, Maureen is interacting with some thing on a phone, and like my heart started racing,” noted Stewart. “Some of the sexiest shit I’ve done onscreen I’m alone! I was like, ‘Oh my god, that is crazy, and that’s what people do all the time. That’s insane! Such massive disconnection, yet you’re just fabricating a wonderful reality. That’s not less real, it’s just perception.”

Then a journalist asked Stewart if she could break down her own outfit? Does she have a personal shopper?

“It’s a jacket and a vest and pants. I have a stylist. She’s rad,” noted Stewart. “But I choose my shit. I don’t like getting dressed by someone. This isn’t mine. We just borrow this stuff and go thanks! And then we give it back. They’ll all be getting this stuff back.”

Does Stewart believe in ghosts and has she had paranormal experiences someone asked?

Stewart said she and the director had many late night conversations about this very subject.

“If it’s real for you, then what the hell else is there? And like there’s so much that we don’t see that we know to be true” and so “I think it’s self protective like a reduction of what it is by saying, ‘Do you believe in ghosts or not? Have they touched you?’ Well what else doesn’t touch you that exists? I don’t know what the fuck energy it is, whatever, there’s something that doesn’t go away, and whether I’m making that up or I’m actually being left with some like residual debris, I feel people fucking intrinsically. I think it leaves shadows.”