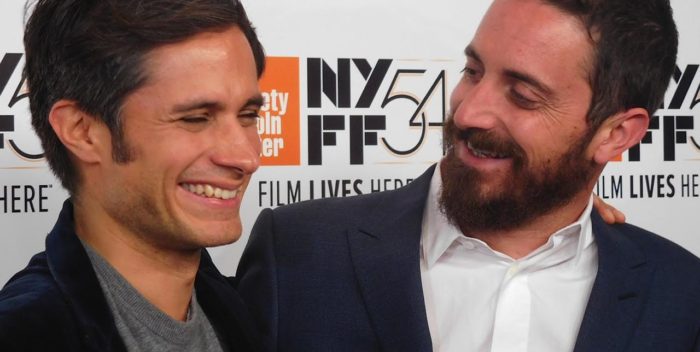 Chilean director Pablo Larraín is hot now with two films – “Neruda” and “Jackie” – screening at the New York Film Festival. Both of them have December releases and Oscar prospects.

Wednesday evening Larraín was on the red carpet for the NYFF screening of “Neruda,” a meta-fictional drama set in 1948 Chile about poet and politician Pablo Neruda. The movie, set in 1948, covers a two-week period went Neruda into hiding after the Chile government outlawed communism. Gael García Bernal, who starred in the director’s acclaimed 2012 film, “No,” plays the detective on the hunt for the poet.

“This movie is not really about Neruda,” the 40-year-old director told Showbiz411 on the red carpet moments before the screening. “It’s more about the Nerudian world, about what he created, his imaginary world and space. It’s a mix of noir, cinema, cat-and-mouse, road movie, black comedy, it’s a hard to describe cocktail.”

As for “Jackie,” Natalie Portman is already getting Oscar buzz for her portrayal of Jackie O in the filmmaker’s first English-language movie. (“Jackie,” which will have a special screening at the NYFF October 13  and comes out December 2 in a limited release.)

On the red carpet I asked Larraín why he felt he had to make these films now?

“Why not? They’re fascinating people. They’re icons, who shaped the fate of the 20th Century in very different ways, in different languages, different countries,” he said. “It’s very accidental that I ended up doing both movies. I was working on ‘Neruda when I was invited by Darren Aronofsky (“Black Swan”) to make “Jackie.” But I understand that people would call them biographies. I wouldn’t use that word to describe these movies. They’re not biopics. No, I don’t think so. They are like just an approach to those specific sensibilities and lives.”

Talking about politics, I asked his opinion about the presidential nominees and if he agreed with Spanish auteur Pedro Almodovar, who said the other day at a press conference for his new film “Julieta,” that, “I never would have believed three years ago I would be praying for Hillary to be president of the United States.”

“I understand what Pedro is saying,” Larraín told me. “When I see Donald Trump’s face I just read war on his forehead and I think that’s very dangerous. It’s not just about me or you or anybody. He will create conflict and there will be a lot of war if that man is elected and that is very scary and dangerous.”

He continued, speaking with passion. “I just think that he has really in here” —  Larraín pointed to his forehead– “war, and he’s going fight and he’s going to have a very dangerous toy which is the U.S. army and I wouldn’t give that toy to him. No way! We are not toys. This world needs protection and common sense and he doesn’t have that.”