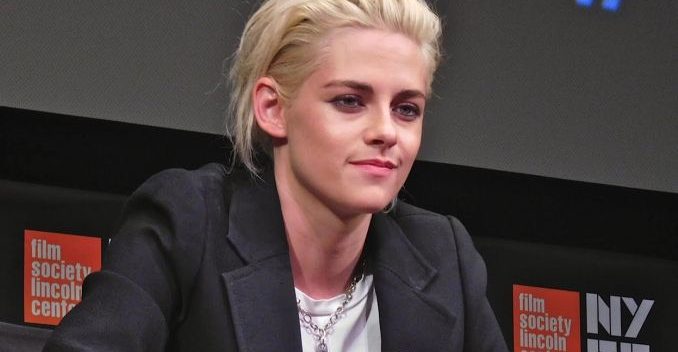 Looking sensational with her punk peroxide haircut and micro mini, Kristen Stewart, was the center of attention Monday afternoon at the press conference for Kelly Reichardt’s new film, “Certain Women,” screening at the New York Film Festival. The film features an ensemble of terrific female actors, including Laura Dern, Michelle Williams and Lily Gladstone. The director and female stars (with the exception of Williams) participated in the 30-minute Q&A following the press screening.

Stewart has three films in the NYFF, including Ang Lee’s “Billy Lynn’s Long Halftime Walk” and Olivier Assayas’ “Personal Shopper.” And the 26-year old actress will be honored at a special event Wednesday evening for patrons of The Film Society of Lincoln Center with tickets still available to patrons for $500.

“Certain Women” with its strong female ensemble cast looks at three flawed but strong-willed women whose lives don’t intersect but somehow connect. Based on short stories by Maile Meloy and set in a small Montana town with a populations of about 7,000, the director told journalists what intrigued her was that, “It was a new landscape to investigate and all the characters were really part of the environment they were in and so it seemed like an endeavor with all these great women characters that were sort of alienated from the people who were closest to them but somehow making connections to people who were strangers.”

There are lots of quiet moments and pauses and focus on everyday moments, elements Stewart said she appreciated about Reichardt’s work.

“The thing I really dig (about Kelly’s movies) is that it takes forever. ‘What’s the most important part? Like show me the moment where something happens?’ And that’s what we’re used to seeing in movies. Look at the stuff that goes on in between stuff, like getting to and fro and stuff like that,” said the actress.

“It’s really vulnerable to not play something. All of a sudden you start reviewing things rather than displaying them. That’s what I love about her movies!”

Stewart spoke about some of the beautiful shots taken at the ranch with her character’s story arc.

“It’s so stunningly beautiful. The character who lives in this environment, it says so much about her because I appreciate physical beauty but not like somebody that lives in Montana and runs a fucking a ranch and wants to really give themselves completely to this in a way that’s really mystical and kind of totally beyond me That shot for me totally functions as — it’s so character defining for her. She wakes up there every morning and that’s what she loves and it’s so beautiful. There’s a reverence to it that’s immediately contagious.”

A journalist asked Stewart what roles most attracted her?

“Good stuff, you know! I typically don’t have to spend more than five minutes in a room with someone to know if I want to explore something with them and I’m just kind of navigating,” Stewart said. “I’ve worked recently with a lot of people I’ve grown up really loving. This is a great thing. I feel super lucky and it’s super conducive to making like good shit and because I think I have good taste,” she laughed “Also At the same time like I really love not like not knowing that something’s going to be good and spending a few minutes with someone and going, ‘Shit you’ve never done this before?’ Well let’s do it now. So there’s no like formula. That’s so not how you’re ever gonna make anything worthwhile. It’s like, yeah I’m really not precious about it. I’ve just gotten super lucky lately, yeah.”

Are the recent movies she’s made more satisfying that Hollywood movies someone asked?

“Totally the same thing. I would never draw attention to the distinction between doing a big movie and a small one because then you’re like, ‘Cool. Why are you doing it? That’s weird,” said Stewart. “I guess you could technically draw distinctions because you have more money to play with,” she said. “Naturally it affects the dynamic a little but at the end of the day, I’ve never approached anything going, ‘Oh, well this is bigger now therefore I’m like less entitled to something meaningful or something.’ That’s what you’d think. But it’s totally not true even if the result of it makes you think it. We were trying.”