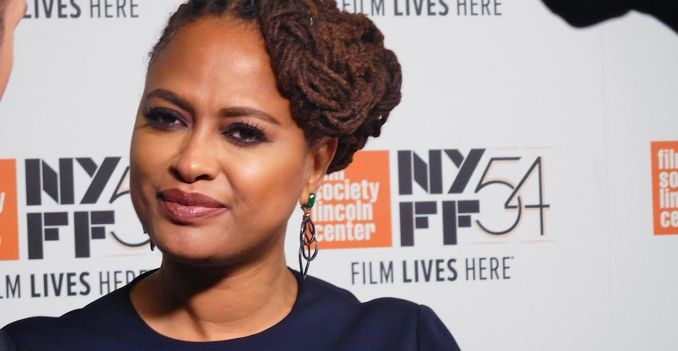 Ms. DuVernay was tireless in promoting the film, beginning with a press conference following the first critic’s screening Friday morning, and the red carpet in the evening where she spoke with everyone, including the writers at the end of a long line. By Saturday morning when she participated in a Q&A at a BAFTA screening she had gone hoarse. “Sorry I sound like a man,” she told the Brit audience. “I love men but I don’t like sounding like one.”

Meanwhile, on Friday during her red carpet duties she got called way half way through to introduce the film at the early screening. She promised she would be back and she was good for her word.

Looking elegant and beautiful in a slinky blue gown, the “Selma” director told us, “My feet are really killing me and I hate to be a diva but I have a little bit of a knee problem,” by which she meant she was anxious to get going. Instead the gracious and brilliant director gave lengthy and thought provoking answers to questions posed by the few journalists left at the end of the line:

When was the moment that you realized that you had to make this film?

AD: This is a film that I always wanted to make. It was always something that was inside of me. When Netflix offered me the opportunity to make a documentary about whatever I wanted I knew what I wanted it to be. I grew up in Compton around a steady police presence, a very, very deep police presence, a lot of interactions with the criminal justice system through your neighbors and friends in my community and so I had been formulating and thinking about these things for a long time so I’d say this is a story that’s been with me for many, many years.

What was your stylistic purpose?

I tried to keep this as simple as possible, because I wanted the highlight to be less style and more on the substance of what our experts and analysts are trying to communicate.

What did you learn making this?

I learned a lot of new information. I think the information that I learned the most that I knew nothing about was ALEC (American Legislative Exchange Council). Everything else I was aware of both through experience and through study and being a student of this space, mass incarceration and the prison industrial complex. Everyone has passion, and that’s one that I’m very passionate about. I’ve made films about it prior. There’s a storyline in my television series that deals with it in an elongated way. My second narrative film, “Middle of Nowhere,” was all about this issue and its relationship to families.

What did you learn about yourself making this film?

I learned that, I don’t know, I can take a lot but I don’t know how much more I want to take, you know, creating the bloody Sunday sequence in “Selma” and having to call action and direct people to beat each other up and be hurt was not an easy thing and to look through hundreds of hours of footage of violence and prejudice and racism was also really difficult thing. I don’t think it’s particularly healthy. I think it was necessary and I’m glad I did it. I don’t know how soon I’ll be doing it again.

What’s the next chapter in the evolution of race relations in this country do you think?

It’s going to be up to us as a country to decide. My hope is that on Netflix more people would see it than if it was in a theater and that it will spark conversation, especially as we go into our elections and we interrogate and really demand answers from the candidates as to what they’re going to do to assist us in what we as a country decide that we want. But in order to do all of that people need to know what the problem is. I don’t think enough people are aware of the issues, so that’s why we try to do a deep dive into it so that you can’t walk out of here saying you don’t know about it anymore. You know. Now that you know you are no longer innocent. You know. Silence is consent, and so the hope is that folks speak, folks act and that we can make a change together.

What’s the role of music in your films? And what do you think is the role of art in activism and how oppression can bring out incredible art?

Music is a big part of my film making process. It’s part of the tools that I use. It’s equal to cinematography and production design and performances and research and all those things whether it’s narrative or documentary, so the music on this is very intentional. It’s actually part of the fabric of the unfolding of the plot so to speak. Every time you hear music in this film we have artists that have been talking about issues of incarceration and criminal justice throughout the decades but no one has listened, so you have Nina Simone, you have negro spirituals, you have hip hop, you have soul. You have all these black artists who have been trying to express our disdain and express dissent and continuing to do so, so that’s the idea behind it.

And it’s a fantastic time that we’re in. The Black Lives Matter movement is no longer a moment. It’s a movement. And as all movements are it exists on multiple planes, not just politics, not just culture, not just historical context, but also an artistic context. You know you look at Kendrick in music. You look at the great literature… You look at theater, at what Lin-Manuel is doing. You look at film, what Ryan Coogler is doing. And I hope that I can be a part of that…. I just came from the New African-American Museum of History and Culture in D.C. The architecture that David Adjaye made in the form of an African crown is what that building is structured on, based on. These are vibrant artistic endeavors during a vibrant, political time and I think they go hand in hand and I’m happy to be a part of it.

“And I got to get out of these shoes,” Ms. DuVernay said, before being button holed on a final question, which was whether she would consider making a biopic of Oprah Winfrey.

“I don’t think so,” she said. “No. It’s hard to make movies about your friends.”