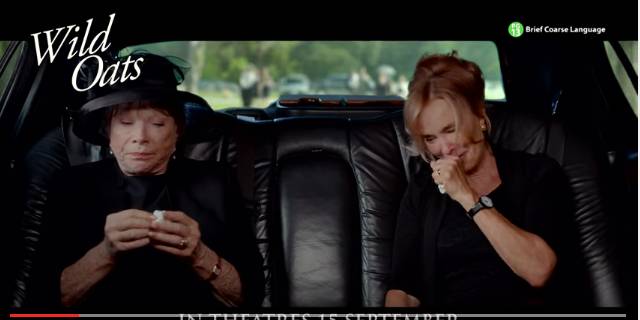 UPDATE: Here’s a weird postscript. Turns out “Wild Oats” aired once, on Lifetime, on August 22nd, at 10pm– far past the bedtime of anyone who’d want to see it. WTH?

EARLIER: I’ve asked around but no one seems to know what happened here.

You may not be aware of it, but last week Oscar winners Shirley MacLaine and (recent Tony winner) Jessica Lange opened in a new movie called “Wild Oats.” Demi Moore, who once commanded $20 million a picture, co-stars, along with Alan Arkin, Judd Hirsch, and Billy Connolly.

“Wild Oats” has two reviews on Rotten Tomatoes, both negative. One is from a blogger in the US, the other is from Singapore.

Forty three producers may be a record. Two of them were Bob and Harvey Weinstein, who picked this up for peanuts and released under their genre label, Dimension. Presumably, “Wild Oats” will go to VOD and video, and we’ll see it on a plane soon and wonder what it is.