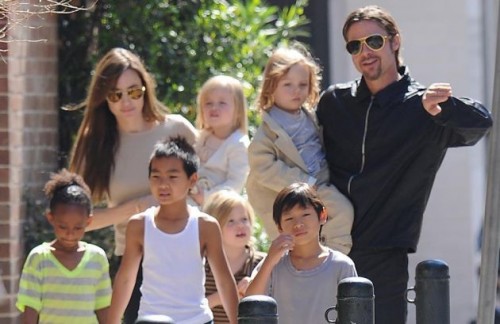 Flashback to September 1st, 2014: Exclusive photos of Brad Pitt and Angelina Jolie’s wedding appeared in People and Hello! magazines. The two mags reportedly split a $5 million fee for the rights, and the money was supposed to go to charity.

Two years later, Jolie and Pitt have split. According to the 2014 filing for their Jolie Pitt Foundation, the money from the wedding photos is listed. Very clearly. “Wedding photos– Ending Book Value, $20,000; Fair Market Value $50,000.” That’s the only mention of them. So what happened to the $5 million?

There is no other mention of it in the charity’s 2014 filing, nor is their any notation of it in Pitt’s Make It Right Foundation.

Back on September 2, 2014, I interviewed the photographer, who said he had done the job for free.

The 2014 does list income– under Royalties– at $3,961,140 million. If that money comes from the wedding photos, it’s more than a million bucks less than previously rhough.

It’s not like the Jolie-Pitt Foundation isn’t generous. They distributed $1.4 million to charities in 2014, mostly in Namibia. The couple– not the Foundation– doesn’t stint on itself, however. They’re said to be worth over $400 million.

Jolie-Pitt Foundation is unfortunately not that transparent. A call to Foundation Source, which administers the foundation, proved to be a dead end. They refused to give the number of anyone associated with Jolie Pitt. The foundation seems to be run by Jolie’s business manager in Hollywood. We’ll see if anyone responds.