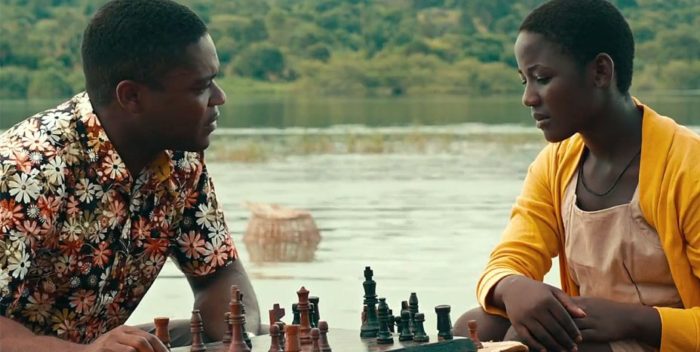 Two family movies open this weekend, but both are quite different, worthy and for adults as well.

First off is Disney’s “Queen Of Katwe,”  which just came in as the second runner up for the coveted Grolsch People’s Choice Award at the recent Toronto Film Festival and for good reason.  “Katwe” is directed by Mira Nair, (Monsoon Wedding) who has an artistic skillful touch in capturing the location’s feel of her subject, doing it with joy, and enchanting as well as heart wrenching honesty. This vibrant story is about a young Ugandan slum girl named Phiona, who after she is introduced to the game of chess pursues her dreams to become an international chess champion.

Lupita Nyong’o plays her headstrong, scrappy mother with ferocity, pathos and pure love. David Oyelowo is the always encouraging local sports coach who is her stout and loyal champion throughout. Both of these gifted actors give beautifully layered exquisite performances. Otherwise, Nair uses mainly unknown native African actors, all charming and sweetly sincere. Kudos to Composer Alex Heffes for his gorgeous engrossing score.  Yes it’s inspirational and yes we know where it’s going. Didn’t stop me and many of the other jaded journalists at a recent screening from dabbing their eyes.  Go see it, it’s a gem.

Next is Warner’s “Storks,” a film about finding-your-family, in whatever form that is. A  truly funny animated bundle of joy, (pardon the pun) treat co-written and directed by Nicholas Stoller. Basically the story is that of two storks, Junior and Hunter, voiced by an always funny Andy Samberg and Kelsey Grammer, who reveal the truth about their job delivering babies to parents.  It’s a quirky movie, because it bounces from being really clever, quippy and amusing, to at times being quite sentimental and surprising. Kind of manic too, which makes the whole movie going experience even more interesting.  Kudos to newcomer Katie Crown for creating a redhead for the ages the protagonist Tulip, and a hilarious Keegan-Michael Key as Alpha Wolf.  I’m sure we’ll see many more entertaining sequel flights from “Storks.”