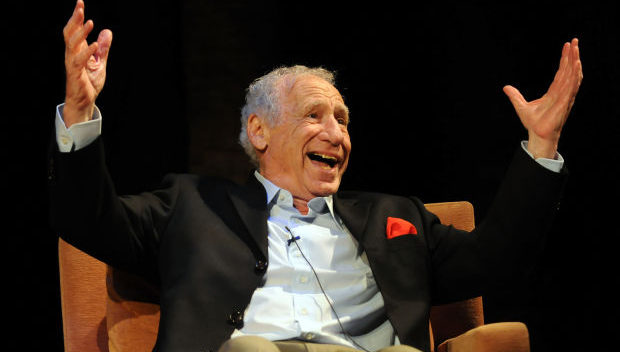 Mel Brooks is 90 years young, and he’s a spitfire, a spark plug. On stage at Radio City Music Hall, playing to an absolutely packed house, he reminisced last night about his career and took questions from the audience. This was all following a screening of “Blazing Saddles” that held up beautifully and elicited peels of laughter and applause as if it were still 1974.

Indeed, every star’s entrance onto the screen drew massive applause, from Harvey Korman to Madeline Kahn to Cleavon Little– all gone now. But the biggest and most thunderous ovations came from Mel himself and for Gene Wilder, who passed away just this week.

The movie pokes fun at everything, contains the first fart jokes ever on film and many many uses of the “n” word, sends up race relations and old Hollywood and the studio system, and ends in a big sequence with Nazis and KKK members. It’s insanely funny. I forgot how adeptly it breaks the “fourth wall” and becomes meta, and very modern, for a few minutes where fiction and meta fiction, some form of reality, all meet.

At one point Sheriff Bart (Little) is seduced by Lily von Shtupp (Kahn). It’s all in the dark, you see nothing, but there are noises and funny comments. Lily is supposedly impressed by the Sheriff’s manhood, and asks if it’s true about black men. That’s when the slurping noises come in. But Brooks told the audience after the screening that he excised a moment where Little tells Kahn “You’re sucking my arm.” Brooks said, “It was just too much.”

I asked Mel after the show if he’d slept all day. But he was too busy greeting everyone to stop and say No. On stage he rarely sits, but works like a stand up comedian. At one point he does a lap around the center area where the moderator sits next to Mel’s empty chair. God bless him, he’s like an extra wonder of the world.

In the audience at Radio City: Susan Stroman, who won the Tony for directing Brooks’s “THe Producers” on Broadway, Cady Huffman, who won Best Supporting Actress in a Musical, Roger Bart, star of Brooks’ Broadway production of “Young Frankenstein,” and comedian Nick Kroll. There was also a gaggle of Brooklyn friends and relatives, Mel’s daughter Stephanie, a lot of cousins named Kaminsky including Howard, who once ran Random House, and a first cousin of Mel’s who is 91 and just as lightfooted.

Brooks has been on tour with this screening-Q&A combo, and I can only hope that somehow it’s been filmed somewhere. It deserves to be made into a documentary. Mel Brooks is a national treasure. He has just one Oscar for writing “The Producers” in 1969. He should have received a Governor’s Award by now. Much as I love movies like “Airplane” and “The Naked Gun,” you can see how much Brooks influenced them just by watching “Blazing Saddles.”