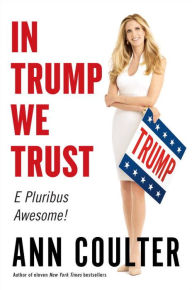 Surprise! I told you last week that Donald Trump’s latest book isn’t selling and didn’t sell that well when it first was published.

You’d think there would be an immediate reaction in the marketplace– especially if Trump is doing better than the polls suggest. He certainly says he’s doing better.

And “In Trump We Trust” is priced to sell. It’s hard cover, but only $15 on Barnes and Noble.com, and $13 on Amazon.That’s so cheap for a hardcover it’s worth buying as a joke gift.

Anyway, it’s not selling well. The book is number 75 on Amazon, and 139 on Barnes and Noble. If only conservative pundits could just sell their writing as part of a radio call in show. But their followers don’t appear to be big readers.