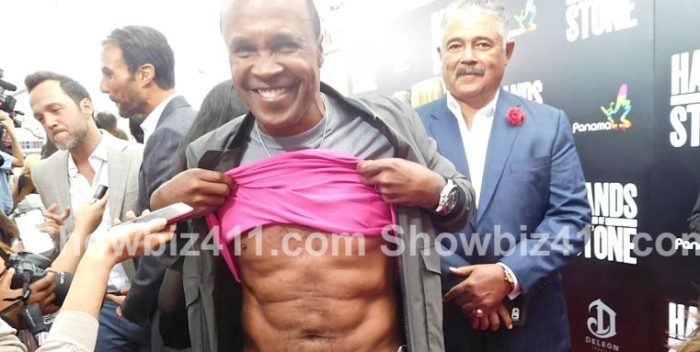 EXCLUSIVE It was a thrill meeting Sugar Ray Leonard, who at 60 still looks terrific, at Monday’s premiere of “Hands of Stone.” This is the movie about boxer Roberto Duran, starring Edgar Ramirez as Duran, Robert DeNiro as his trainer Ray Arcel and the singing star Usher as Sugar Ray. The movie’s title comes from the boxer’s nickname.

Sugar Ray pulled up his shirt to show me his impressive abs and I took a photograph.

The legendary boxer said when he first heard Usher was going to play him he thought it was a joke. “And then he called me and said, ‘Help me out!’ I was a fan of Usher since he was a kid,” he said. “He had that movement, that music in his head, and for me that’s my thing too, the flow… I tried to emulate Muhammad Ali and Sugar Ray Robinson, Elvis Presley and Bruce Lee.” 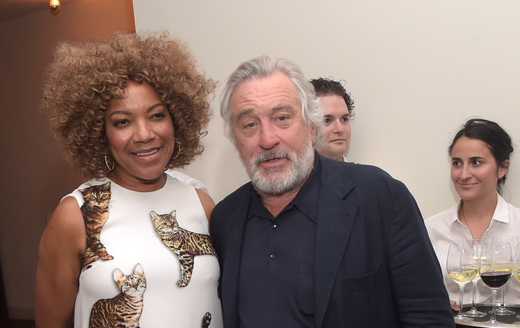 Although the movie is about Duran, the movie’s anchor is the rivalry between the boxers and their famous three fights. The first fight, June 1980, Duran won on a close decision. In the rematch, only five months later, Duran shocked boxing fans when he quit in the eighth round – the famous “no mas” moment, a remark the boxer later claimed he never made.

I asked Sugar Ray what went on in his head when Duran just waved his hands and quit their famous fight in 1980.

“That moment will never go away, it’s locked in my head forever. I didn’t know. I thought it was a trick. I didn’t believe what was happening. I couldn’t understand, like the press of the world, didn’t know what was going on that day. I couldn’t tell you. We’re friends now.” He whispered to, “ I used to hate that son of a bitch!”

On the red carpet, Usher pulled out his iPhone to show a photograph of Sugar Ray in boxing trunks in his prime, an image that inspired him.

What did he learn about himself playing the role I asked?

“I can actually develop a second layer of act. I know about the sixth act, but I developed an eighth act with this role.”

I showed Usher the photograph of Sugar Ray I just took on the red carpet. “Amazing, and at 60! Isn’t that crazy? At 60 that man is still looking like that! Black don’t crack!” Usher said. laughing, before going into the theater.

Beyoncé and Jay Z were also in the house at the New York premiere  at the SVA Theater, followed by a glamorous party. Ramirez mixed and mingled with everyone. Other guests included DeNiro’s wife Grace, and cast member Ruben Blades.

Earlier in the evening on the red carpet I spoke to director Jonathan Jakubowicz, a Venezuelan Jew, who told me that growing up in Venezuela the Panamian Duran was a hero. (Arcel was Jewish, and Jakubowicz sprinkles the movie with his Yiddishisms.)

“I really wanted to tell that story when I started reading about him, his relationship with Ray Arcel was so unique. Duran is the son of an American marine who abandoned him and his dreams of avenging Americans, yet an American is the one who turns him into a world champ. Also, his rivalry with Sugar Ray is the biggest in the history of the sport and the enigma of ‘no mas’ is the biggest in the history of boxing… I think we finally answered the enigma.”

Jakubowicz told me his next project will also star Ramirez and De Niro. “We had so much fun working together and we want to do it again. It’s based on a true story about an intelligence officer that uncovered the biggest counterfeiting operation in history.”